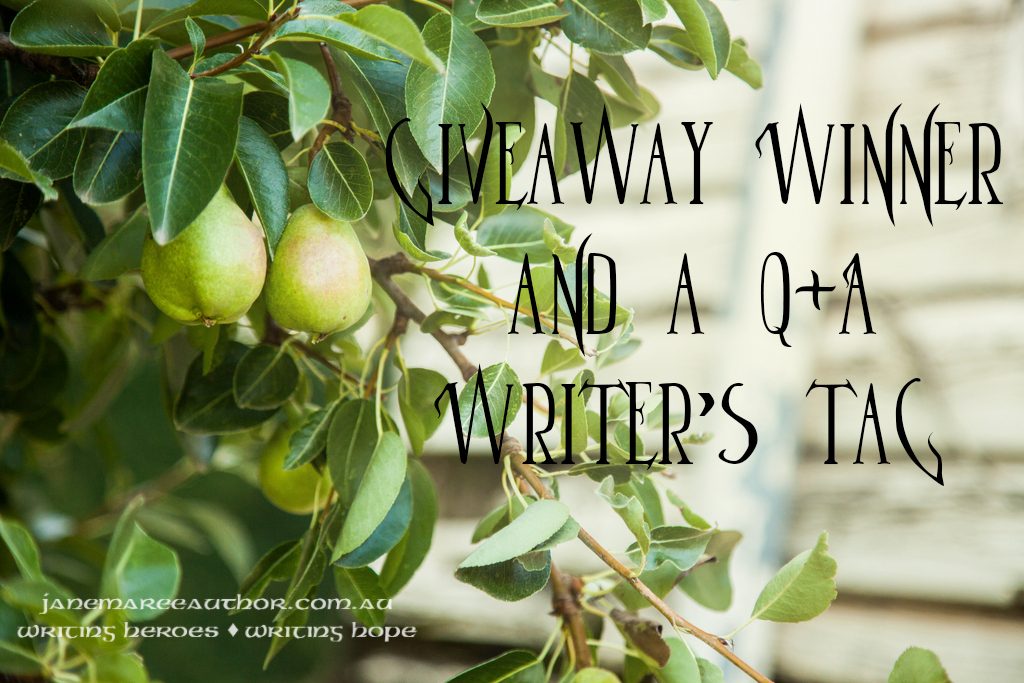 It’s been one whole week since my website launched! *cue confetti explosions* You guys are all so amazing and flooded me with comments and emails and I’m still so overwhelmed with your encouragement. 🙂

But now that it’s been a week, the time has come. I have drawn the one lucky winner for my giveaway and I’m excited to announce that the winner is…

Eep congratulations my wonderful friend! *throws confetti* I’ll be sending you an email at some point today, and you can tell me your prize choice and mailing address so I can get your book on the way! 😀

Moving on to the second half of the post, today I have a Q+A Writer’s Tag from my friend Cassandra Barthuly. She’s got an epic blog and her posts on writing are sheer brilliance, so you should all go stalk them all.
Anyway, getting right into the questions.

WHAT IS YOUR NOVEL ABOUT?

My current WIP (work in progress) is called Agent Kit and is about a fifteen-year-old kiddo called Benjamin Kit who’s trying to stop a world war. And about a street wise fugitive who’s trying to keep Ben alive.

Or in other words, here’s my attempt at a semi-synopsis: Agent-in-training Benjamin Kit wants to stop the war, but to do so, he must stand against the most powerful organisations in the world. Even if he’s not alone, how can one group of renegades possibly win?

DID YOU START WITH THE STORY OR THE CHARACTERS?

I definitely started with the characters. Agent Kit is the second book in my trilogy, and I never planned for there to be more than one book until halfway through book one this random boy walked in and he just needed a story. Then he went and completely messed up my happily-ever-after ending in the first book and reaffirmed that there definitely needed to be a sequel.

And then, because I’m very bad a wrapping things up, a third book happened as well. I still haven’t worked out how that happened. 😛

Generally speaking, I normally start out with characters. I’ve got half a dozen story ideas, and twice as many that are just characters with no plot or story attached. Characters are just so fun to create and develop.

WHAT LED YOU TO WRITE IT?

a) Book one ended in a cliffhanger and very obviously demanded a second book.
b) I just liked Ben so much that I wanted to write more.

Aside from that, I just felt that the story couldn’t just end in one book. There was more to it. There was deeper development. More theme and character arcs that I wanted to play with. I wanted to show more aspects of the world that I’d begun in Rogue Escarlate and expand them further and from a slightly different perspective—through Ben’s eyes.

WHAT REAL-LIFE EVENTS OR PEOPLE INSPIRED EVENTS OR CHARACTERS IN THIS BOOK?

I actually have several amusing scenes that were ‘retellings’ of funny stories from a homeschool conference that I’d been to just before writing it for the first time (away back in November 2016). At this point, only one of those scenes is actually making it into the rewritten version that I’m plotting out currently. I’ve also made several inside jokes in all my novels. The sort of jokes that most people wouldn’t even notice as out of the ordinary, but certain people would instantly know. 😛

WHAT AUTHORS OR STORIES INSPIRED YOU AS A WRITER?

Nadine Brandes is a huge inspiration for me. Not only are her books absolutely amazing, she’s an epic person herself. Basically author goals.

Hope Ann is also an amazing person, and she’s definitely encouraged me a lot. Her books are really cool and she’s such a great person to get to know.

Many stories have inspired me in many different ways. This specific trilogy is definitely inspired a little by the Bourne movie series (many explosions and car chases xD), and there’s also the very vague hints of a Robin Hood retelling that have managed to survive my rewrites and edits.

That’s it for today, friends! (Except for another post, featuring Hope Ann’s EPIC COVER REVEAL. I’m so in love with the cover, seriously guys. You need to check it out.) Thanks for dropping past. 🙂 If anyone’s interested at all, feel free to grab this tag! I’d love to hear about your writing.

Congratulations, Gray, once again for winning the giveaway!! I’m so excited for you. 😀 You should be getting an email from me very soon.

Your turn! What real-life events or people inspired scenes or characters in your book? Who or what has inspired you as a writer?

Do you like characters with a strong sense of hono

Do you like the beach? . It's no secret that I loo

Do you fall in love with books or characters at fi

LotR movies or books?? . It's a controversial #Tol