On My Bookshelf: Contemporary

Reading has always been a huge part of my life. From a smol toddler, to the current me, I’ve devoured many, many books. I have a bookshelf with five decent sized shelves and each one absolutely packed and double layered to the bargain. So I thought it would be fun to grab a couple of those books off of the shelves and show them off for you all. I’m thinking that I could do this with other books/genres, so do pop me a comment and tell me whether you’d be interested to see this sort of post again.

Added onto the fact that books are epic, this post seemed like a good plan because we’re currently building a floor-to-ceiling bookshelf on one wall of our lounge room. The former bookshelves have been moved out into the hallways, the carpet has been cut out, the wall has been cleaned and repainted. A month from now and we should have a gorgeous new handmade bookshelf to fill. (I might just have some pictures of the process so far for you guys in my newsletter next Wednesday.)

Today I’ve picked five contemporary books that I absolutely loved. To be entirely fair, they’re not all ‘contemporary’ as such—some are leaning closer to fantasy or dystopian—but if I keep ‘contemporary’ as a very loose genre for now, I can still get away with it. 😛

This is one of my favourite Eoin Colfer books (battling against Airman and The Supernaturalist). I read it in one day and as soon as I started, I was sucked into the story. I laughed way too many times, and I still quote one or two parts because they’re absolutely priceless. The characters and writing style were so fun and engaging.

Murt snagged an apple from the fruit bowl. ‘Look,’ he said. ‘Life is like an apple.’

I raised my head out of my hands to look at the apple. This should be good.

Murt stared at the apple for several moments, then ate it in half a dozen bites. ‘Ok, I can’t finish that simile. But give me some credit anyway.’

N. D. Wilson is more commonly known for his 100 Cupboards Trilogy (which I also really liked, so consider them unofficially on this list too 😛 ) but I actually liked the Ashtown Burials trilogy even better. It’s a mash of contemporary and fantastical epicness. Evil immortal villains, keys that can unlock any lock ever, three siblings, and—of course—a dragon’s tooth that everyone wants. Sibling relationships though, guys. The main characters are really good and I just still can’t get over these books.

“That wasn’t me. I’m not a morning person. There’s another person inside of me that does all the morning things.”
– The Dragon’s Tooth

(I’m very disappointed in my editions of these books because in a collage like this the titles don’t line up, and it makes me sad. xD)

This one I read longer ago than the others that I’m mentioning, but I did enjoy it. Perhaps not as much as the others on this list, but it still needs noting. (Besides, I was trying to avoid falling back on the good old Rick Riordan and J. K. Rowling because we all know about them anyway.) It’s a story about a girl who reads books. How cool is that? It’s not the normal sort of story, and it has it’s own little charm. The world was really intriguing and the story line is quite unique.

“Writing stories is a kind of magic, too.” 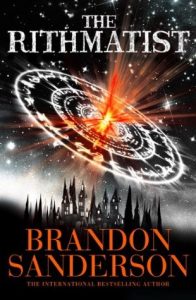 To be entirely fair, this was actually on my sister’s bookshelf, but it was close enough. xD It’s very loosely ‘contemporary’ since it’s official genre is gearpunk, if I recall correctly. The majority of Brandon Sanderson’s works are hugely fat and I’m way too terrified to try them (although I do plan to at some point). The Rithmatist, however, is a managable length and I actually really enjoyed it. It’s about a boy called Joel who goes to a special academy. So ordinary…or not. When magic, kidnappings and Rithmatics are involved, it couldn’t possibly be ordinary. This book was like one big explosion of plot twists and epicness. AND there was a friendship between a boy and a girl with no romance. You have no idea how immensely that pleased me.

Plus, Sanderson is slowly getting closer to fiiinally writing the sequel to this so, THERE IS HOPE, MY FRIENDS. Now, read the book. 😛 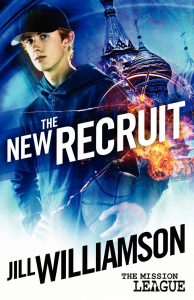 Again, I’m sneaking in another that technically isn’t on my shelf, because we only have it as an ebook. That’s good enough for me though.

So far I’ve only read The New Recruit and Chokepoint out of the Mission League series, but I have high expectations for the rest of them as well. The New Recruit was an epic read that had me hooked right from the word go and never let me off (including the ending, because I’m still hanging in for book two to arrive in the mailbox). There were so many cool characters, and something I found really interesting was how some of them were almost like stereotypes. There was the girly girl, the strong I-need-no-one girl, the bully guy. At first glance, that would seem like “ugh not another cast of cardboard characters” but it wasn’t actually like that at all. On the outside, they looked like this, but inside they were so much different. They were dynamic and absolutely fully developed as characters. I really enjoyed seeing that.

I shifted in my seat. Forces of darkness? What was this, Jedi training? I bet they had an arsenal of plastic light sabers in those black cabinets. Maybe a few storm trooper masks…and a chess board or two.

So there you have a little snippet of some of the contemporary(ish) books on my shelf. I hugely recommend all these books, and if you’ve read any of them—we must flail over them! Or if you wanted to know more in-depth thoughts about these books, you can stalk me on goodreads, or ask me in the comments. I just want to talk books together!!

Would you like to see any other specific genres from my shelves in the future? Have you read any of these books? What are some favourite contemporary books from your bookshelf? Comment and chat with me!