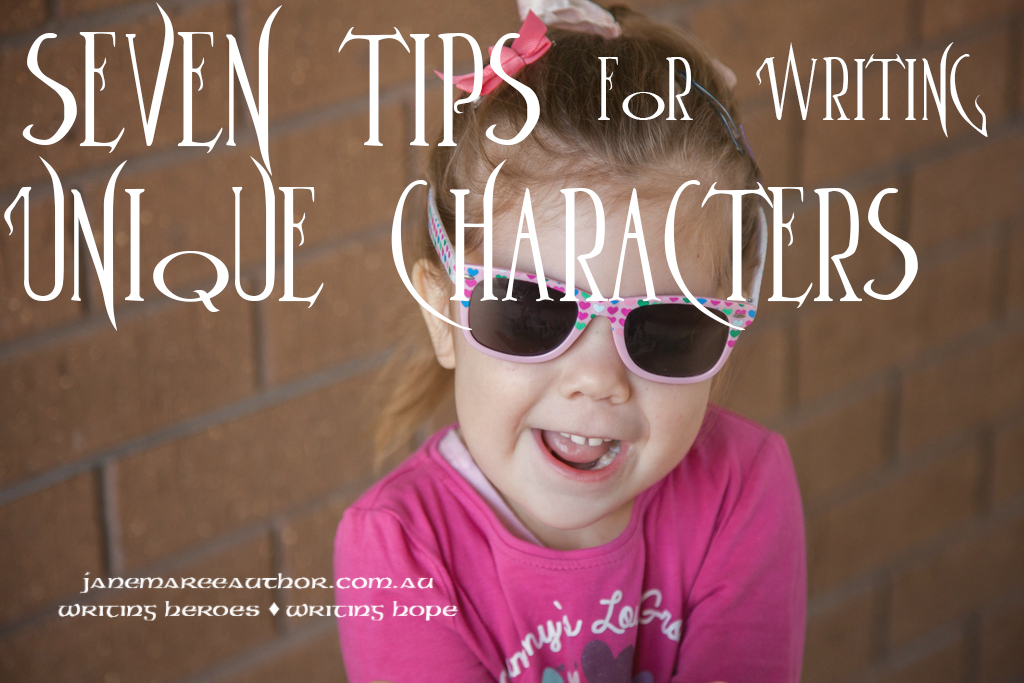 “Your characters are cliché.”

Isn’t that one of the worst things that a writer can hear? The precious babies that you’ve spent so much time on sound like just another Harry Potter. Just another Disney princess.

But with the amount of books in the world today, how can you possibly write a unique character? After all “there’s nothing new under the sun,” right?

Right. There’s nothing completely new, but that doesn’t mean you can’t have a unique character. So I’ve got seven tips that you can use to liven up your characters a little and give them that extra tweak of individuality. Obviously some of them don’t work for every single story ever, and there’s a ton of other ways and more details but I can’t possibly cover everything in one post. 😛

(On that note though, if there’s something in here that you would like me to expand on, do tell and I can do another separate post on it.)

Each character has a reason and a motivation that keeps them sticking around through the story. They want to overthrow the evil queen of the moon. They want to protect those they love. There’s a reason for each one, and they’re all different reasons.

If you can find your character’s motivation, it opens up a lot more room for a deeper layer to their personality. And the deeper your characters are, the more original and unique they will be.

Obviously I’m not meaning this in a literal sense. Please let your characters sleep at some point in the story. Be nice. 😛

What I mean is don’t be satisfied with ‘good enough.’ Don’t let your character walk into the scene, say his lines, and then leave again. Make him hang around in the background, inserting random comments, fiddling with his hat, coughing every time someone says something he doesn’t agree with. Look a little deeper and you’ll actually find that your characters might just be more unique and real than you originally thought.

Ask yourself questions about the character or get a friend to ask questions. They can be completely random questions that maybe aren’t even related to the story, but help to craft deeper characters.

If your character just walks into the screen to say a line and then leaves, it gives your readers a sense of forced action—like your character is a puppet on a string, not a real living, breathing being. And puppets aren’t unique.

This isn’t meaning the way they talk, but rather the way the book (or chapter, if it’s a split POV (point of view) novel) is written through them. How it has their thoughts. Their views. Their hopes and dreams and personality melded into the prose.

Finding the voice of your narrator is a matter of really getting into their mind. As the writer, you need to be them while you’re writing them. You can’t just respond however you personally would, because if all your characters are basically you, then they’re all basically the same and you’ve lost the sense of uniqueness.

As soon as you find the specific character’s voice, they’re even more realistic and personal. Get into their heads and the POV should sound like they’re talking (this applies for both first and third person). Show their thoughts. If you have multiple POV characters, each one should sound different. One might be more logical. The other might be more snarky. There should be difference enough that the reader can tell whose perspective it’s from without needing to be told.

4: Play on the cliché

You have a contemporary character called Henry Pots. He wears glasses, lives with his aunt and uncle, and sleeps in a tiny, cramped room. Sound familiar? Poor Henry Pots sounds very similar to Harry Potter and very clearly needs to be completely revamped.

Or does he? What if he’s read Harry Potter himself and always dreams that he’ll get a Hogwarts letter one day and discover that he’s related? What if people call him Harry Potter and it really gets on his nerves? What if he’s annoyed at the similarity because his personality is so completely opposite than Harry’s is?

This is a method of dealing with clichés in general—pointing them out and making a big thing about them before the readers have a chance to.

Obviously this is a very extreme example, and if you’ve gotten this far with a character similarity, then it might be a good idea to change it up a little. 😛 This step is only a last resort.

Following on from the last point, if you’re worried that your character is a rip-off of another character, before you throw them out the window—look a little deeper. How close are they really?

When I started reading the Percy Jackson series, I was slightly sceptical. I’d just read Harry Potter and then boom. Another YA series about a boy with dark hair and green eyes and a special power and a special place for these powered kids. I admit I rolled my eyes a little.

After reading the rest of The Lightning Thief (and subsequently the rest of the series) I no longer considered Percy a Harry-copy. He was a completely different character who very much had his own personality and story.

It’s possible that your character isn’t as close as you think they are. And even if they start out slightly similar, they might just weave their own story as you write them. So don’t be too hasty to completely scrap them.

These tics are another way to develop your character in his own unique way. It’s just a small thing—an action or word—that he uses a lot. Real people do this, and using it for characters adds another layer of realism to them.

Perhaps he waves his hands around expressively when he talks. Maybe she fiddles with her necklace all. the. time. A friend of mine rubs her hands together a lot, when coming up with evil plans, and just when talking about anything at all. One of my brothers screws his eyebrows up if he’s confused. Watch the people you know—be it your family or friends—and see what hand actions they use, or what words they keep saying. Maybe they always respond with “indeed” instead of “yes” or they say “cool” to basically everything.

Sometimes you can use these tics to be a contrast with their personality. A character might be a very prim and proper sort of man, but he has a horrible posture, for example.

You could have a character who wears an eyepatch. Or has a specific tattoo or scar. These are also good methods, but they do need to have a reason.

Harry can’t just have a lightning shaped scar on his forehead. He has to have it because it was the mark left by Voldemort He-Who-Must-Not-Be-Named. You can’t just say that Captain Hook has a missing hand. You have to expand and give him a reason. Why is he missing a hand? Once we push that last little bit, we discover that the Crocodile bit it off, and still as his watch ticking away inside of him.

Every character has a role in the story.

Carswell Thorne is a charismatic criminal and thief. Jason Bourne is a fugitive and former assassin. Jace (apart from being heartbreakingly precious) is a rebel and a fighter. 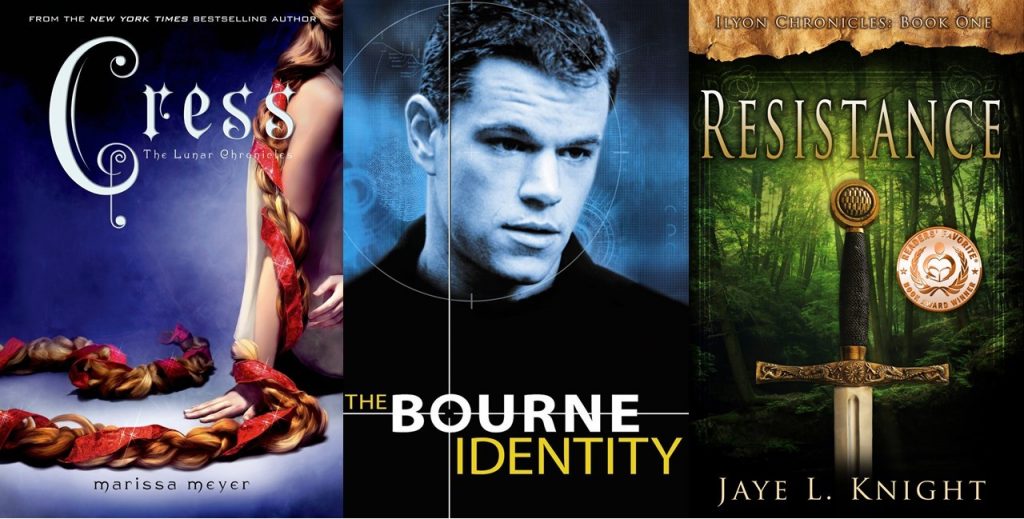 If that was all these characters were, they simply wouldn’t be anywhere near as good. But they go a lot deeper than this because they have inner personalities, morals, or views that contradict this outward appearance.

Thorne considers himself a ‘bad’ person who shouldn’t be trusted and absolutely couldn’t be a hero. This contradicts the charismatic way he acts and the role he plays.

Bourne is a former assassin, but he is still a decent man.

Jace fights to protect those he loves and cares about, but inwardly he’s the most vulnerable character in the book.

If you find your character’s role in the story, you can find something to bounce off of that in a contradiction, and you can dig a little deeper into who he or she really is.

Amongst the gajillion things you have to do to write a story, characters are high up on the list of importance. Without good characters, your readers are less likely to be drawn into the story. Crafting unique characters is incredibly important, but sometimes it actually isn’t as hard as it sounds. It can be just a small tic or a little tweak that draws them out and really brings them to life in your novel.