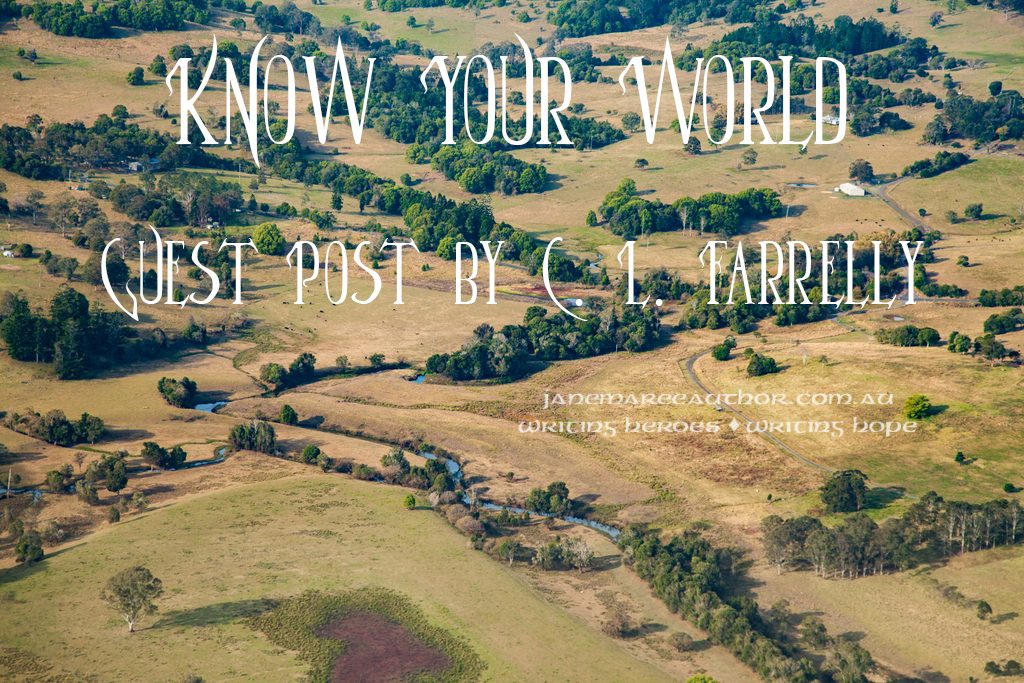 Good morn all. Today I have the lovely C. L. Farrelly here to chat about worldbuilding! I’m not really a person for extensive or very skilled worldbuilding so I can’t wait to apply what she has to say.

So I’ll step back and let you enjoy! 🙂

Jane asked me to do a blog post about worldbuilding. Probably because I like doing it so much. I have a world of my creation with history spanning back to the ‘beginning.’ Of course, it contains a detailed magic system, mythical animals, and fantasy people-groups. I’m still working on it and refining it each time I write another short story set in the world. I don’t claim to know all about worldbuilding but I can at least speak from my experience as a reader and a writer.

I have been known to spend hours discussing gravitation pulls of moons and planets, the courses of the heavenly bodies, a world and sky that are of two separate realities. I have planned out non-globe shaped worlds and how gravity would work there. It makes some people groan, but my eyes will light up if you want to talk about worldbuilding—the more complicated the better.

On to my thoughts about worldbuilding.

Some kinds of stories don’t need much worldbuilding at all; others need a huge amount if you want them to succeed. Some stories get the amount of worldbuilding just right, others don’t. Some writers do a good amount but present it in the wrong way. Two common traps of worldbuilding are when the writer info-dumps everything they know of their story world, or they simply don’t know their world enough to give any information on it. If you don’t know your world you won’t be able to explain it. Writers can also get carried away with worldbuilding and if you are out to be published and become a well-known author you do have to write as well as build your world.

Sci-fi and fantasy books suffer if the writer does not know the world that the story plays out in. In the same way that a reader of historical fiction will complain about facts being wrong, so will readers complain if the sci-fi stuff works just ‘because’ … or even when magic works like, well, magic.

You need to know your world, but the readers don’t!

The better you know your world the easier it will be not to info-dump. It is great to be excited when you start discovering how your story world works and the history and the people and places, but your readers are there for the story. If your history is so intriguing, then write another short story about those happenings. Leave the info dumps out of your main story. In fact, a short story that is part of your world’s history can be a great thing to write when your main story simply won’t behave. Readers are there for the story after all, and we do want them to marvel at the world—not groan.

Fit pieces of info about your world into the story when it is relevant or advances the plot. If you know your world well then it will be easier to put in small well placed sentences and paragraphs that make your story world blossom for your readers.

Create a ‘bible’ for your world.

It is good to keep everything you know about your world written down, so you don’t forget it, and so you can see any problems with it. If your worldbuilding is really complicated keep a ‘bible’ of the different laws, customs, greetings, etc. or you’ll probably end up with a finished draft of inconsistencies. If you have your details written down in a ‘bible’ you will be less tempted to insert them into the story. 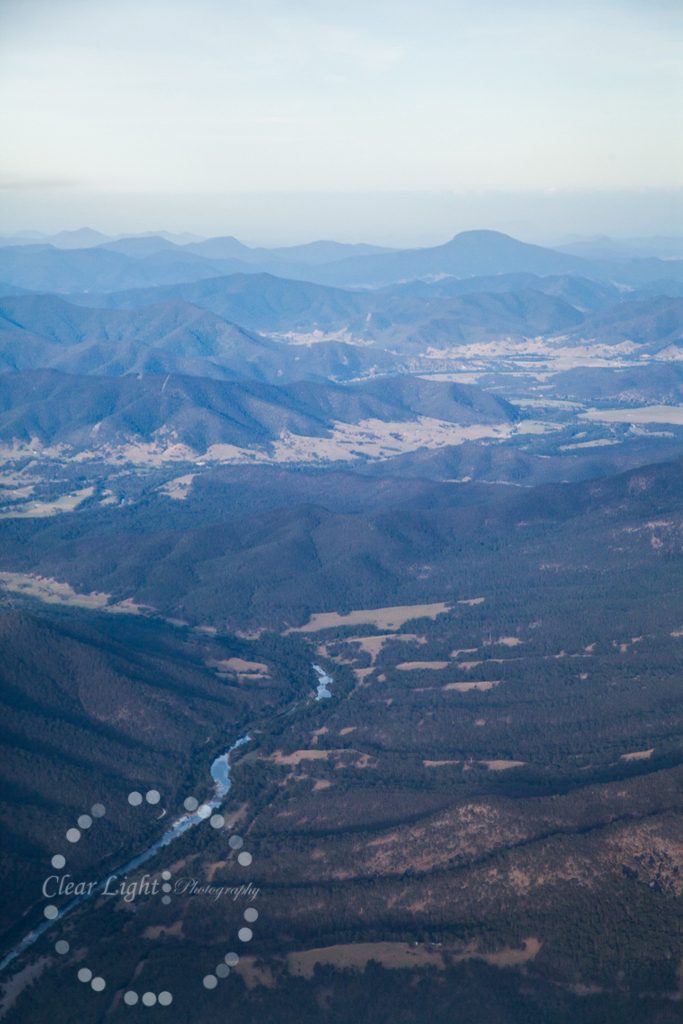 Draw maps as you go.

If you have a map in front of you, you will be able to better explain where your characters are. If you know, your description will be better, more precise, and less confusing. Think of it like an explorer going out and discovering new towns and places. He sketches them onto his parchment as he arrives. Sometimes he will hear tell of a mountain range or castle which he has not yet seen. The explorer will get out his map and mark the castle in with pencil. Later when he knows for sure that it is there he will correct the positioning and go over it with pen.

Consider reality. Readers only have so much suspension of disbelief. Mountains often block rainfall, so on one side green land may stretch away from the ridges and on the other spinifex plains crumble into a desert. You may be surprised just how many watercourses there are in a ‘dry’ land (which comes in hand for thirsty characters.) Consider what roads people in past ages would have built between cities. Map drawing is not just plopping in random towns and forests.

Question your world. Why would anyone have built a town there and not somewhere else? Where do people get their income from? What is a luxury? How do they communicate? What do all those answers entail?

Are you going to have a magic system, or high-tech elements? How does it really work?

If it doesn’t work then make it work. Think, discuss. Find someone who also wants to talk about worldbuilding. Sometimes people who are not even writers would enjoy helping (think people interested in science, engineering, technology, nature, city planning, or even just reading books. You could be surprised). Well done magic and technology are really quite similar. Your readers will probably notice that you don’t know what you are talking about if you don’t. So know your world. It will bother them if they don’t know why something is the way it is. If you do know, you can probably get away with very little explanation.

Often good magic will make more sense than science. It is also easier to make it make more sense.  You get to create the laws of magic. Science must be plausible, but with magic anything can happen, providing that there are laws and you continue to follow them. Those laws can be as wild as you wish, they just need to be firm. All the best books I have read that contain magic all have ‘laws’ to their magic and it is not just ‘magic’ but a foundational law of the story world, like gravity.

If you have magic in your book then that is the foundation you must build the world around. It changes so much everyday stuff. Can the magic affect transport, food production, medication? What would happen if the magic failed?

Our world has laws and structures, likewise your story world needs them.

Even if it is all chaos people will be creating laws in that chaos to try sort it out. That is just what people do. So ask questions, or get a friend to ask questions, and write down answers in your story ‘bible.’ How does the society work? How are relationships between towns, countries, people groups? Do they interact? Always question your world so that you can discover the answers. What are the laws of your magic? The legal laws of society? The unspoken societal ‘laws’?

Be consistent and understandable.

Unlike this post. 😛 If you know and can remember everything about your world it will be easier to be consistent.

Be consistent with names too. Names are fun, but be careful that they are not so long and unpronounceable that they turn people off. Even hardcore fantasy fans can be put off by a first page full of unpronounceable names…Especially when they start with the same letter. If you make up names of towns, try picking a country or language that exists and base names of that. Short and sweet could be good, of course it is okay to put in a few long beautiful unpronounceable names. Don’t jump overboard though, books and water don’t go well, the pages get soggy. 😉

Know your world so that your reader can know it and enjoy it through your story.

C. L. Farrelly is a writer in her spare time. Not that she has a lot of spare time, especially as the eldest daughter in the house. An Aussie from NSW Australia, she loves her country, but also enjoys creating other worlds. She likes to take photographs, do random crafts or sewing projects found on Pinterest, she journals, and writes articles and stories. Naturally, she likes to read stories too (especially if they have amazing magic systems in them). She also enjoys cooking meals and other interesting things, just to see what they are like. Most importantly though, she is a daughter of the living God, saved by his grace.

Chat with C. L. Farrelly in the comments! What element of worldbuilding is your favourite? Do you have any handy tricks you use when world-crafting?

Do you listen to music while you read? . I don't o

Have you read much by Brandon Sanderson? . Februar

How has your schedule been lately? . “We are all

Do you collect mugs? . It's #MugMonday and time fo

Do you like books about fairies? . It’s a gorgeo

How do you organise your bookshelves? . Some reall

Any Mandalorian fans out there?? . I know, I know,

Did you grow up in a bookish family? . My house ha

Do you like books with an eerie tone? . Happy Rele

Do you ever get lost in fast-paced books? . I have

What are you currently reading? . The drought has