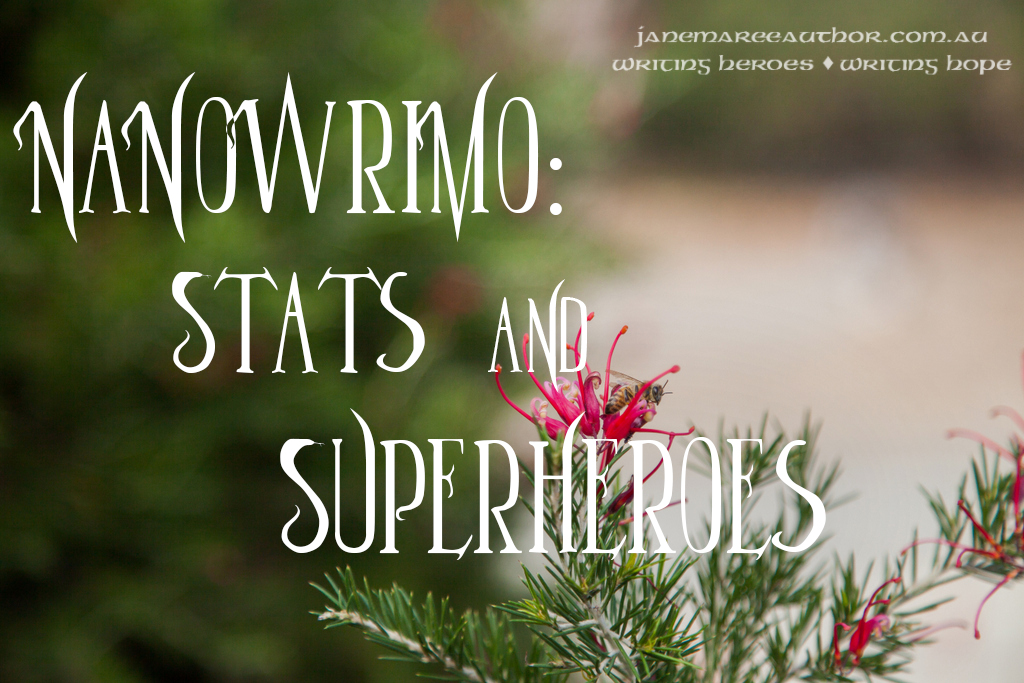 Even though November feels like it started just a few days ago, it’s already so close to being over. Since I was participating in NaNoWriMo I planned my month to be packed full of writing like a crazy superhero, but there was also another whole layer of other life things that stole away some of that time I planned to use for writing.

The beginning of the month, I had the band concert which I played flute at. This past weekend one of my cousins got married (eep!) and I spent from Thursday until this morning over where the wedding was. Every Sunday afternoon I’ve been doing practices for our church’s Christmas carols. And more and more things. It’s been busy but fun.

In between all the things that have happened this month, I did manage to write as well. I stayed up until midnight to start writing right at the beginning of the month, which was pretty fun, and the next few days of writing were so much fun too. I really enjoyed writing every bit of this novel.

If you don’t remember about my project, Powerless, you can stalk this post where I talked all about it, or here’s the rough summary:

Superheroes!! That all turned into supervillains!! Geeks!! Explosions!! Ninjas!! Big families!! Pizza!!! I totally made pizza an important plot point!!! I’m obviously not obsessed with pizza!!! Or superheroes!!

I had thought that maybe I could write down some diary-like thoughts every day and put them in this blog post, but like all my thoughts along those lines they stubbornly remained thoughts and I didn’t actually do anything. xD You’ll just have to do with the few major points I can remember.

On day six I broke my all time record for daily word count and hit 12,514 in the one day. 😯 I still don’t know how I managed that, to be honest. My characters just wouldn’t shut up that day.

And because the NaNo graph is so motivating, of course I took a screen shot of the moment I updated my word count and realised I’d won NaNo. 😛

Then the day after I hit the 50k goal…my novel ended. Just like that. After 50k of words the story wrapped up and happily ever after was suddenly upon me.

I was actually a little bit disappointed that it was over so soon, but excited at the same time. Only eleven days in and my story was done. Crazy. Absolutely crazy.

I really enjoyed looking at the themes and character arcs that I had in this book. I had the major themes of love and family and power and argh, it was so much fun and interesting to explore those deeply. Some parts of my characters’ arcs I felt like I just needed to give them a big hug, but they pulled through and I’m so proud of them all. *hugs them tight*

The characters themselves were also so fun to write and I absolutely enjoyed working with them. (Particularly after I sat down and named a few more side characters. xD)

But once I was done, I was a little stunned. What was I going to do with myself for the rest of the month? I could just relax and do nothing!

Instead, I pulled out my draft of A Sprig of Green. You may remember this small novella that I wrote in July Camp NaNo—my precious little story. I read over the story and started writing a list of all the problems and things I wanted to fix and started working out what to do to fix the problems.

I’ve been working on that a little over the last two weeks, and it’s been really fun but also challenging as I’m still trying to find out the best way to go about everything. I hope to have at least started writing the actual edits into the story by January!

More on that another time. For now, here’s a random bunch of NaNo stats! Because stats are fun. 😛

Words written: 59,214
Highest word count for a day: (day 6) 12,514
Goal reached: day 10
Novel finished: day 11
Cups of chai consumed: *sips tea* at least a dozen
Nights past midnight: 2 (day 6 and leading into day 1)
Superhero movies watched: 4 (Spiderman: Homecoming (for the third time), Guardians of the Galaxy 2 (not as good as the first one), and Wonder Woman)
Distracting collages made: 6 (I really shouldn’t make this many aesthetic collages 😛 )

As tradition, I have three snippets for you from Powerless—one from each POV character—and also the first and last sentences just for fun.

I jumped up the stairs two at a time and paused at the door, turning around. She was still standing at the bottom step, watching me. “Did you do the whole ten years of training to become a ninja?” I blurted out, immediately going red.
She looked up at me, her ginger frizz going even brighter as the light from the setting sun hit it. “Not ten years, no.”
“Oh.” I shuffled my feet. “Okay.”
Her lips formed a half smile again and she backed away from the bottom of the stairs, pulling the black scarf up again and twisting it into a mask with a quick movement until only her eyes were visible. “I trained seven years. Same as Batman.”
Then she vanished, just like a ninja should.

“Luka?”
I glanced up at The Master’s voice. “Yes sir?”
“What have I told you about singing?” The man’s eyebrows raised.
“My voice sounds terrible?”
“Exactly.” His brows raised higher until I couldn’t help wondering if they’d come off completely. “And what about the clothes? I told you to wear the black ones.”
“I know,” I replied, glancing down at the bright green and blue shirt and brown pants I was wearing. “But these just seemed better.”
The Master’s eyes narrowed. “Are you disobeying me?”
I considered that for a few moments. I never disobeyed The Master. He always knew what was best. Except for in the matter of fashion choices. Black would just be wrong. I had to be…sunshine colours.
I didn’t know why. I just knew.

“Megaaaan.” A small bundle of blankets tackled my legs and I patted Julia’s head.
“Hey, Ju.” I escaped her death grip on my leg and crouched to her height. “What’s the blanket for?”
“It’s my ninja cape,” she grinned, flapping the ‘cape’ draped over her shoulders and several meters along the floor behind her as well.
“Ninja’s don’t have capes, Julia,” Sofi huffed from the doorway. “Megan doesn’t wear a cape.”
I glanced up and bit my lip as a laugh caught in my throat. Sofi was dressed head to foot in black, her ginger hair covered by a too-big black beanie that was tugged almost over her eyes.

I nodded seriously. “That’s true. But maybe Julia’s a sort of ninja that does wear a cape. Because ninjas can wear what they want.” I squeezed Julia in a quick hug, playfully tugged Sofi’s beanie down over her eyes and slipped past them

All the precious small Rosso siblings were so fun to write. Dylan, too, was a different sort of character than I’d written before and it was really interesting to have that new experience of writing a geeky comic-book boy. And Megan is a Ninja and Luka is a superhero so obviously they came naturally to me. 😉

Anyhow, I’ve rambled along for long enough. Your turn!

What fun new things have you done in writing this month? If you’re doing NaNo, have you hit 50k yet?? How far through your novel are you? I demand snippets!! 😛