Elements of a Good Critique 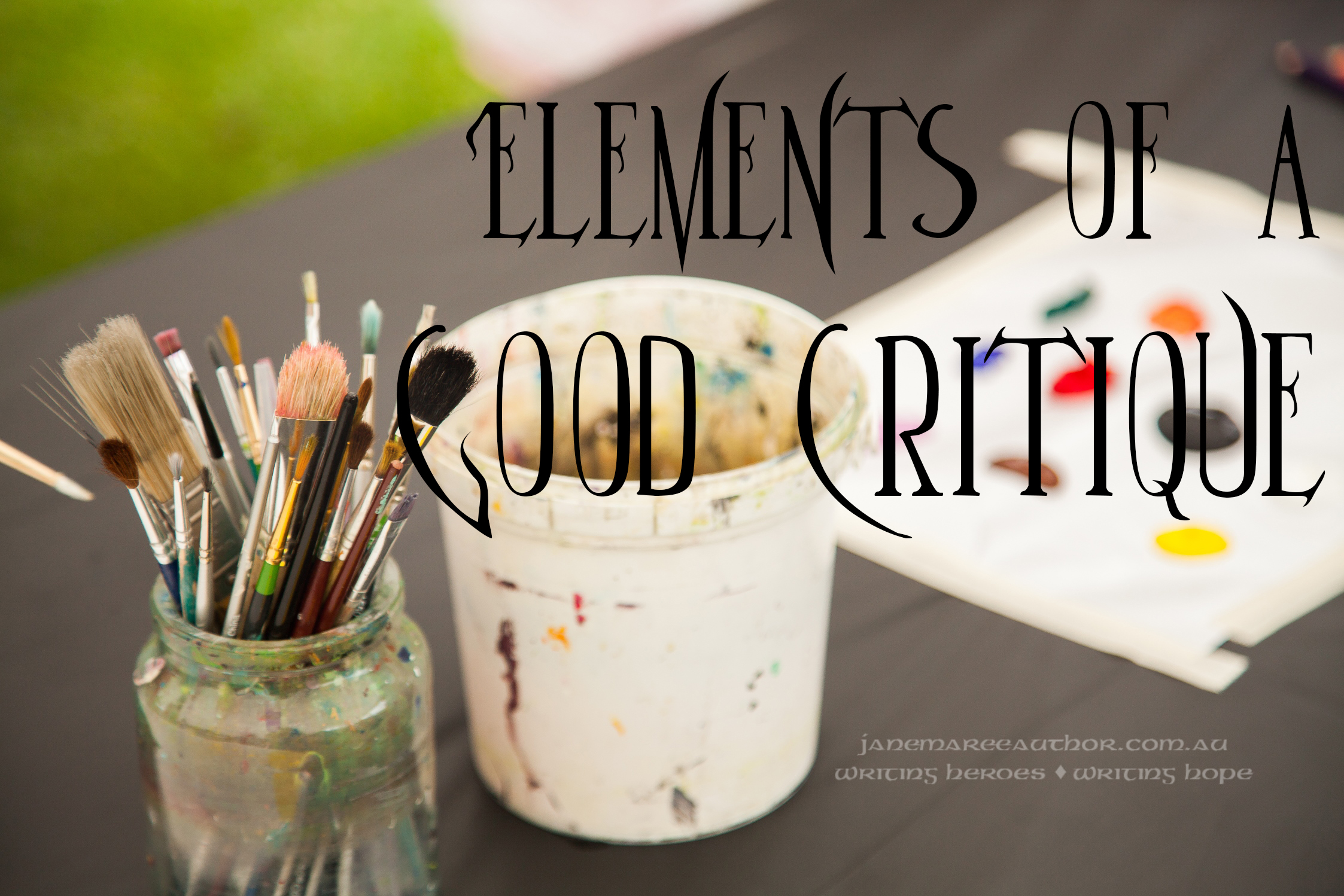 I’ve been critique reading for a fair while now, but when I first started off, I was absolutely clueless of what I was meant to do. Basically all I said was “I like this part” and “I like that character” and I didn’t say anything about things I didn’t like. Keep it too the good things. I thought that was the way to go.

Since then, I’ve grown a lot in my critiquing and general knowledge of writing.

So what does make a good critique? Is it telling the author every single bad thing about their story? Is it pointing out all the grammar mistakes or typos?

There are lots of different elements that make up a good, quality, useful critique…

If you’re going to critique someone’s short story, novella, novel, or anything, your comments need to be laid out neatly so that the author can go through them easily.

Typing them into the actual text—way too confusing.
Using a seperate document and making a dot point list of page/paragraph/sentence numbers and the problems on them—also incredibly confusing.

Word doc and Google docs both have very handy comment settings where you can type in your comment nice and easily beside the text. You can also use track changes (in Word) or suggest edits (Google docs) to put smaller details inline with the actual text.

Here’s a screenshot example from one of my novels and the comments my (amazing) alphas left.

As you can see, the highlighted text is where they’ve left a comment, and there’s also inline suggestions as well. (And now that I’m looking back over that scene I’m slightly amazed because my writing has changed a lot since I wrote this, and that was only in January this year 😯 )

This is a section from a word doc (not my story, a deleted scene from a novel I’ve critiqued) you can see it’s fairly similar. Highlighted text is for the comment (which is on the right margin of the page, though I didn’t include it in the screen shot) and also nice inline suggestions.

It’s easy to read and go through, which instantly notches it up to a better critique. There’s no use in a critique where the author is too confused to even apply it.

Make sure you know what sort of feedback they’re wanting

Say that someone on a writer’s forum has asked for critiques on their short story. I decide to lend a hand and go over it and hand it back with a very detailed critique on plot, characters, themes, grammar, punctuation, possibly a few tips about em dashes, and everything else under the sun.

Only to absolutely freak out this poor writerly soul because she only wanted to know if the concept was decent. Or whether there was a good plot. Or just the bare details.

Before you critique anything, you need to make sure you know what exactly the person is looking for. Do they want just a loose critique, or should you go full out? It’s as simple as asking them one question, and then you can tailor the critique to what will actually be most useful for them.

Encourage and build up

Yes, you shouldn’t only say good things about their story, but everything you do say—even when you’re pointing out problems—should be with the intent to build them up and to help them improve.

Sometimes phrasing your comments can be difficult, but it is worthwhile spending those extra moments to word something in an encouraging way, so you can avoid slapping the author in the face with all his mistakes and just making him want to curl into a corner and hide.

Don’t force yourself into their story

This is one of the most important tips I have. It’s so easy when critiquing, to suggest changes that are simply stylistic choice. For example, take this sentence:

The king studied him, his dark eyes boring straight through Johan.

I would put a comment on that sentence saying that ‘his dark gaze‘ would feel more natural to me. It works as ‘eyes’ but I, personally, prefer ‘gaze’ because it’s easier to avoid awkward mental images with that phrasing. However, I mention in my comment that it’s just my opinion and not something that needs to be changed. That way it’s easy for the author to see, and they don’t just follow along with everything I say.

If I tried to change the phrasing of every sentence to be more like how I would write it, then the story slowly becomes less and less theirs, and more and more mine. That’s not what a critique should do.

As a loose guideline: when critiquing, tell the author what needs to be changed and what you think would be good to be changed.

If you are given a deadline…finish before then

As with everything, critiquing often comes with a deadline. It might be a few weeks, or even a few months. Whatever the date is, don’t miss it. You’ve agreed to help this author, and they want you to be done with those edits by that day, so if you aren’t done by then…you’re not being helpful.

The author might want to start editing right away after the critiquing is done, so the longer you drag it out, the longer she has to put it off, and everything just slogs down into a big pile of mush.

(Only my alpha readers are excluded from this because I only told them a random day for the sake of it and they all have busy lives and I haven’t even touched that story since giving it to them, so those wonderful people are exclusions from this tip. 😛 )

If the author has given you a date a month or two away, don’t use that as an excuse to put off the editing. Do it right away. Get it done as soon as you can. That will really bless the author so much more than if you’re in a scramble to get it done on the last day after doing nothing for the weeks you had before then.

(Is it called fanguying or fanboying? Someone educate me. xD)

Professional editor or not, I still fangirl over the books I edit. I scream out my theories, ooh over characters, faint at plot twists, and do all sorts of shrieking and flailing. I should be hired to be a fangirl. 😛

If a plot twist caught you by surprise, put that in a comment! And don’t be afraid to put it in all caps if you’re excited. Being a good critiquer doesn’t mean you have to be solemn and lowercase. Screaming in caps can be incredibly encouraging and it makes authors smile to know that you not only liked that scene, but you were absolutely fangirling over that scene.

Critiquing for friends or any author at all can be incredibly fun, and also a great learning experience for editing your own work. You get to try out the editing process on someone else’s novel without having to actually fix the problems yourself. Bonus! 😉 I love helping others with their editing, because I know how much an outside opinion has helped me.

Chat with me! Have you done critiquing before? Or has anyone ever critiqued for you? What was the most useful part of what they did?

What books are your “comfy” books? . Hellooo #

What a book about writing you think EVERY writer n

Writers, how did you get into writing seriously? .

Can you keep track of a storyworld without a map,

What was the last unexpectedly 5-star book you rea

Do you read faster with ebooks or physical books?

What’s a hobby you wish you had? . Happy release

What's a book that people keep recommending to you

Have you ever dressed up as a book character? . In

Do you like war/spy stories? . I have a big love f

When do you usually burn your candles? . It was hi