Hey friends! As you can see, today I’ve got a wonderful friend (and fellow Australian writer) here to talk about new year’s goals.

I’m one of those people who makes goals and then forgets about them two days later, so I’m eager to read the tips and advice that Chelsea has for us all! 😛

I’m absolutely delighted to be here today! I’d just like to take a moment to congratulate Jane on her super cool blog and say thanks for letting me come and chatter about making goals and/or resolutions for the New Year.

Making Goals for the New Year

Can you believe that in a week it’s going to be 2018? Of course, with the advent of the New Year, everyone is going to be making New Year’s Resolutions (which will have inevitably petered out by January 7th).

I’ve never been a resolutions maker, but I am a goal maker. And I’m also a very competitive person, especially when it comes to beating personal bests and improving myself, so I find this an efficient way to get things done.

However, there are probably people who aren’t like me out there, who despair over the thought of making—and more importantly—sticking to their goals throughout an entire 365 days. So, I’ve compiled a list of five things that will, hopefully, help you make and complete your goals in the coming year. I can’t guarantee that every one of them will work for everyone, but, hey, we’re all individuals!

This sounds like it should be a no-brainer, but it really isn’t. So often, the resolutions or goals that people make at New Years are completely unachievable. Let’s take a look at the goals I made for myself at the start of 2017.

I must have decided that I had no life. Some crazy writers might be able to complete this goals list, but I couldn’t and I didn’t take that into account when I made them. No ordinary writer can write four new novels (presumably of 50,000+ words), edit two of those novels (and when I say edit, I actually mean scrap the entire first draft and rewrite the entire thing, changing pretty much everything except maybe the occupation of the MC), plus reading 100 books (that’s a lot of books!), entering four competitions and writing a bunch of new short stories! It wasn’t happening! A manageable goals list might look more like this:

Even then, some people may not have enough time to do this, but you’ll need to tailor your list to your own life and schedules and whatever else.

On the other hand, you can’t make them too easy, or you won’t be challenging yourself. If you read an average of twenty books a year, don’t set your goal for fifteen books, set it for twenty-five, or thirty, or even fifty! If you write one novel easily a year, challenge yourself to write another one, or to edit the first one. How much you do here is up to you, just make sure its not too easy for you. The aim of making goals is to stretch yourself, strengthen your muscles and try something you’ve never done before!

3: Make sure you want to achieve these goals

There’s nothing worse than being made to do something you don’t want to do, especially when it’s yourself making you do it! If you don’t want to achieve the goals you’ve set for yourself, you aren’t going to end up doing it. If you make a goal to write a novel in a year, but what you really want to be doing is creating an anthology of poetry, you aren’t going to be putting your very best into your novel. Why not make write a book of poetry as your goal instead? It’s much easier to complete a goal when you actually want to achieve it.

4: Break them down into manageable chunks

The thing I find most overwhelming about goals is how big they seem to me. the key to defeating these massive goals is to break them down. Say, your goal is to write an anthology of poetry throughout the year, that’s all very well, but an anthology of poems includes a lot of poems! How on earth are you going get all those poems written between school, and life, and work?

So, break it down. You want an anthology? Okay, start by making a commitment to write one poem per week. That’s doable, isn’t it? Just one poem each week and by the end of the year, you’ll have fifty-two poems! That’s a lot of poems too. 😀

Similarly, if you want to write a 100,000-word novel (that’s about the average length of a YA novel), in one year, all you need to do is write 273 words a day. That’s not a lot of words and committing to writing 273 words before breakfast, or after dinner, every day seems a lot less daunting than committing to writing 100k in a year.

5: And finally! Ask God to help you choose and stick with your goals

This is the most important point of all! It says in Psalm 127:1 that “Unless the Lord builds the house, the builder labours in vain. Unless the Lord watches over the city, the guards stand watch in vain.” That advice doesn’t just apply to houses and cities, it also relates to goals. Unless God is behind your poetry anthology venture or novel-in-a-year, it’s frankly not going to happen.

As you begin to consider next year’s goals and resolutions, pray over them, ask God what He wants to use you in. When you’ve prayerfully decided which goals God wants you to pursue, ask Him—and continue to ask Him throughout the year—to help you complete those goals.

That’s it for today! Once again, thanks for the opportunity to do a guest post, Jane! I hope you find these tips helpful. 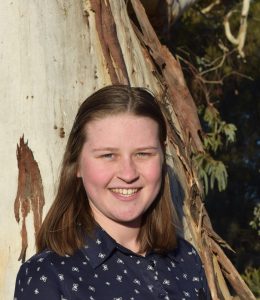 Chelsea is a crazy, homeschooled, book and musical lover. She enjoys reading, writing, crying over her characters and confusing people. She writes historical fiction with a dash of fantasy, though she has lately tested out dystopian. She is seventeen years old and lives on a property in Australia with four horses and a lot of kangaroos.

Check out her blog at An Ordinary Pen.

Chat with Chelsea in the comments! How did achieving your goals or resolutions go this year? What goals do you hope to achieve in 2018?