A Guide to Torturing Your Characters 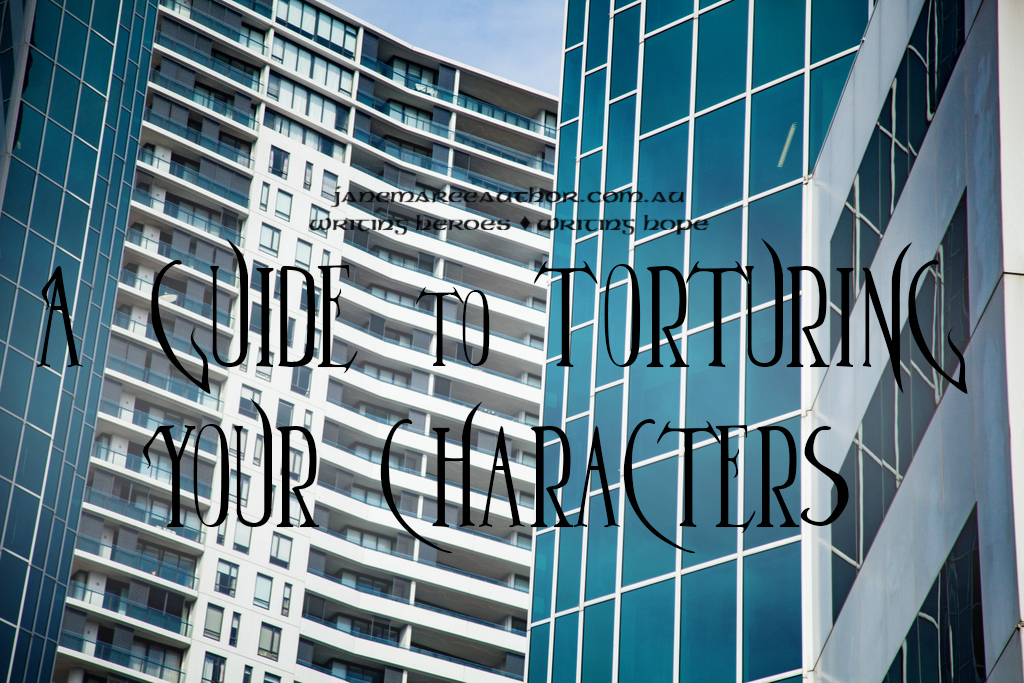 Out of all the characters you’ve ever written, how many of them have a happy story the whole way through? What about your favourite books? Do the characters in them have happy, fun-times all their lives?

I can certainly say a big “no” to that question. I’m not very nice to my characters, and the books I like best are the books where everything isn’t perfect for the characters. While it sounds horrible to say it, it’s true. I call it fun to read those books where terrible sad things happen and the characters go through tough struggles.

Because, when you think about it, if the character waltzed through and completed the story goal without having any trouble or struggles…that would be an incredibly boring book.

However, when torturing your own characters, there are several guidelines that writers should follow. It’s not just tossing pain around willy-nilly.

Only do it if you have to

Don’t torture your characters unless it furthers the thematic goal and preferably the plot as well. You can’t just throw in a torture scene or a shooting or anything like that just as a story starter, or a feels dump. It has to be there for a reason—to impact the characters so they make a hard decision or to force them to push themselves as they continue on despite the pain.

If you just injure your character for a bit of action or to try trigger some tears from the reader, it’s not going to work. It’ll end up forced and the reader will feel cheated that they didn’t get to experience the deep emotions that should come with a scene like that.

Luckily, in most Speculative Fiction/YA action, pain is often a necessary element. As I said at the beginning, you can’t just have a story without having some struggles or pain because it’d turn out terribly boring.

Leave off the graphic details

Whether it’s a battle scene, or a single bullet wound, no one wants to know the details of the blood and guts. It’s gruesome and untasteful and it’s not going to further your plot. Sure, you can’t just go all airy-fairy and ignore it. Pain is messy, and you should write it realistically.

Instead of focusing on all the ew-y details, it’s far more powerful to focus on the character. How the character feels. Their emotions. Their body language. Their thoughts. That will draw the reader in much more than describing all the blood and the gross graphic-ness.

It’s all very well if you torture them physically, but it’s not going to draw your readers in and make them suffer with your character and get all the feelsy feels.

Give them dilemmas. Make the character fight inside himself to work out what is right and what is wrong. Give him tough decisions where both lead to horrible ends, but only one is ultimately right.

You can mentally torture the friend/fellow main character/mentor/ally of someone who is being physically tortured. Pound out that guilt. Make them see what their friend is going through and make it their fault. Don’t just make them think “This is my fault” because if it isn’t actually they can still believe that in a tiny part of their brain. But if it actually is their fault…then that can tear them apart from the inside.

And that = feels for the writer and the reader.

Guilt. Responsibility. Failure. Betrayal. Doubt. Use them. Make the character battle inside himself as much as—if not more than–on the outside.

Give them a life still

Sometimes a writer can get so caught up in giving every character a depressing backstory of agony and pain, that they ignore the fact that CHARACTERS ARE PEOPLE. GIVE THE PRECIOUS DARLINGS A LIFE.

Or don’t. If you’re one of those sorts of people. xD

But honestly. Don’t just randomly toss in horrible backstories because that’s what everyone does. You can have people with happy families, bright pasts. In fact, I think that some of the most powerful characters I’ve read and written are those innocent characters who learn how harsh the world is, but they still keep on smiling anyway. They keep on being the light they started as. They end up wiser and stronger, but still happy and hopeful.

Focus on the character, not the suffering

Being mean to characters is hard, even though it’s necessary.

It’s not fun. It’s not like we take pleasure in it, as such. But we know that humans are messed up, and this world is messed up, and as writers we should portray that realistically too.

But it doesn’t end there.

As Christian writers, we shouldn’t just portray the messed up world. We have a calling to show that the mess isn’t the end. There’s still hope. There’s always hope.

We shouldn’t focus on the pain and torture we’re putting our characters through. We should focus on how the character keeps on going even through that. We should show our readers that we believe in an undying hope that doesn’t change depending on physical circumstances.

Torturing your characters happens a lot—and it should happen quite a bit, in varying ways—but we should always make sure that it’s the absolute best we can do for the story. There’s no use in trying to toss in a tear jerker just for the sake of it. That’s cheating on your readers. If you want them to cry, they have to have something to cry about.

Have you ever made yourself cry by being mean to your characters? What’s the meanest thing you’ve done? Have your characters ever surprised you by how determined and strong they are? Hang out with me in the comments!

Have you ever seen or been IN a musical? . Every y

You enemies are attacking: do you pick a sword or

What are you currently reading? . /Mortal sight, b

Did you grow up as a bookworm? . I’ve loved book

Do you read many books about mental health/suicide

If you could have any super power, what would you

When was the last time you stepped out of your com

If you found a mysterious old mansion, would you e

If you had a chance to visit space, would you take

Do you ever collect different editions just becaus