Aesthetic Collages – The Making Of

I love making collages for my stories and characters (or other people’s characters for that matter). Recently I was doing some plotting and I got a little sidetracked. After an hour or two, my three main characters had aesthetic collages of their own.

I’ve always found that making collages helps me get into the characters a little better and to see different sides of their personality than just making up a character sheet does.

When I started writing seriously (a fair few years ago, now) I made a collage for that very first story. And it’s long enough ago that I’m no longer ashamed to pull out that collage and show it off to you. It’s not very good, but I had fun making it at the time and beginnings are actually beautiful things. I think this collage is worth it.

Below I have the first collage I ever made, and the most recent collage I’ve made. 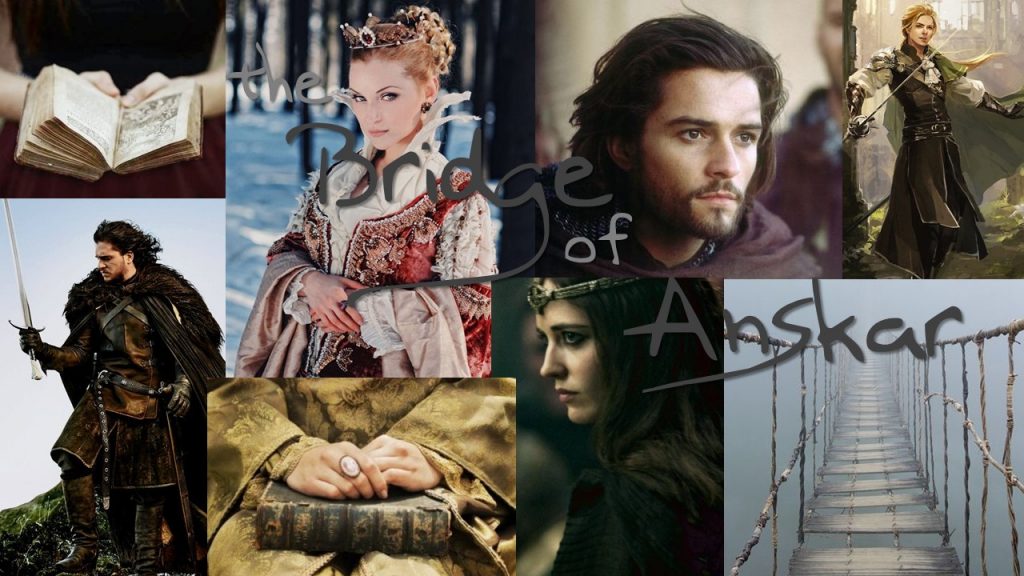 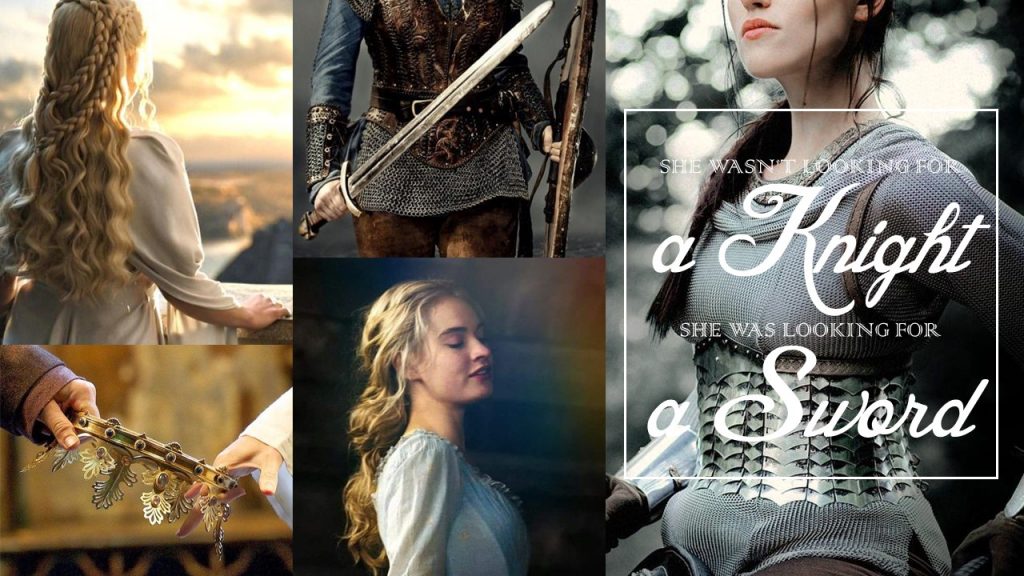 As you can probably work out, the top is a story-collage from The Bridge of Anskar. The second collage is for a main character in my current WIP (the details of which I am yet to decide whether or not I’ll keep them semi-secret. More on that another time).

Anyway. As you can see from those two collages, I’ve changed style a little, and I think it’s fairly safe to say that I’ve improved a little too. Over the last little while, I’ve actually had some people ask me how I make these collages, so I’m going to bring you on a little tour as I make a collage for a random character idea of mine—Verity.

First off I head over to pinterest, to her character board. In the off-chance that this character doesn’t have a board…I get distracted and make one instead. 😛

(Sneak peek to one of my secret character boards 😯 )

Then I pick out some pictures from the board. As a general rule, I go for five images. That way it doesn’t end up with too many images and simply look too messy or busy. I pick a colour theme and go with that. For this collage I decided to go with a blue-grey sort of look.

Also notice the description of my board. I’ve got a little bit about Verity and as you can see from that and the pins, she’s a sort of mystical girl, shy, and loves to dance. Now we need to get that feel into the aesthetic collage.

This is where it gets really technical.

Haha. Actually no. My sister has photoshop and I have complete access to that, but I’m lazy and I couldn’t be bothered to use her computer for something as simple as this. So yes. I do all my collages in PowerPoint, of all things.

Back to the point. Whether you’re using PowerPoint or something more specifically designed for this (I believe there’s some excellent online programs that work really well, though I’ve never tried them myself), the next step is to copy those chosen images in and spread them out nicely so you have plenty of space to work. I start off with more than just five images here. You can’t rush these things. I like to try a couple of different options before settling on one. 😛

Also what you can see from this is I have a few pictures with Verity’s face, and a few which are more dancer aesthetic. Then the one of her sleeping on the train, and the empty cafe table are for the feel of aloneness. And I have her name and a quote. Now, sometimes I have words on the collages I make, sometimes I don’t, but as a general rule I only have one set of words. So I will either use her name, or the quote. If I use both, there just becomes too many different words battling for attention and it doesn’t look as neat.

Moving on to the next step—ordering the pictures!

This step is basically trying everything everywhere and seeing what works best. I like to have a big image either on the left or the right edge that covers about 1/3 of the collage. I just think that looks nice, but it’s certainly not the only way to do it.

Experiment around, see what you like, see what you don’t like. Try all the different styles and sorts. Toss out the pictures that don’t fit, keep the ones you particularly like. There’s no right and wrong here. 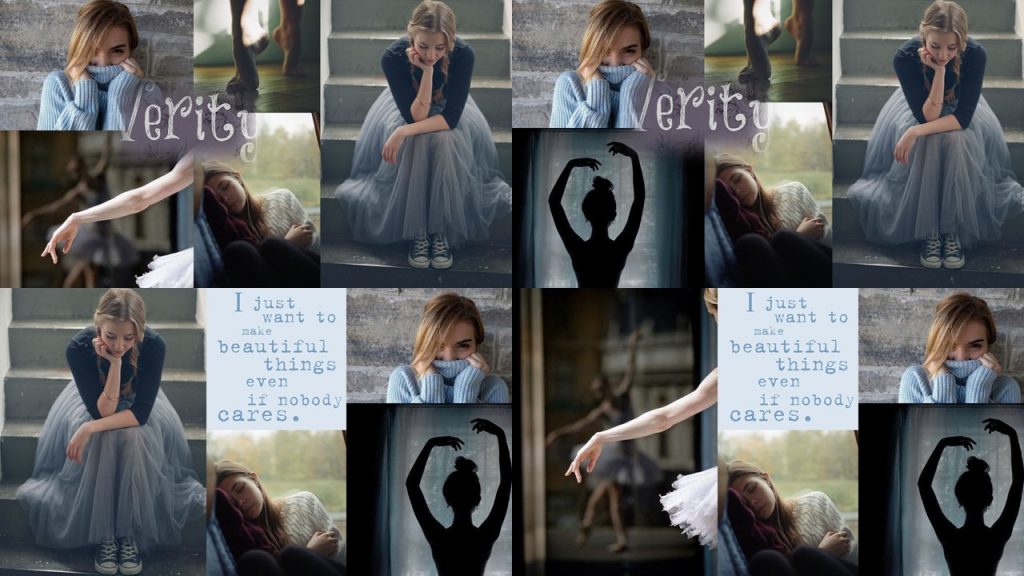 Look, I made a collage of collages. XD

As you can see from that, there’s four different arrangements with different orders and images. My personal favourite of those is the top right, because it stays with the colour theme the best—with the blue-grey and the green/brown colours—and it’s also got a good balanced feel to it.

Something else you might notice is that some of the edges line up, some don’t, and that’s very deliberate. I make sure all the vertical lines are exactly together, but I specifically keep the horizontal joins of the four smaller images out of line with each other. I find that if they’re exactly together, then it simply looks too square and perfect. And if they’re only a little bit out of line then it looks like a mistake, so I go nicely wonky so it stops looking odd and starts looking nice.

Another thing I noticed was that in the images with faces, I put them in a triangle shape. I tested to see what it would look like if I switched around the left hand images of the top two collages (so Verity’s face was at the bottom) but it just turned out looking wrong. 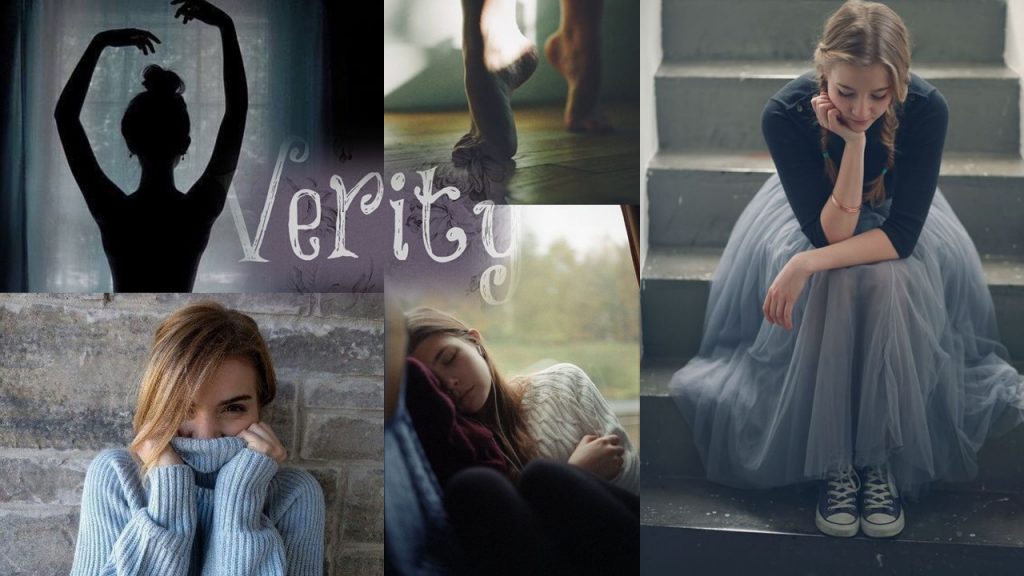 The balance seems off, it doesn’t make me go ‘ooh, nice collage’ just with that tiny little change. This is where basic visual arrangement comes in.

When taking photos or drawing a picture or arranging flowers, odd numbers are generally the best. To set out the flowers nicely in the vase, if you have—for example—four stalks of fern and array them at the back as a background for the flowers, it won’t look as good. Whereas if you get rid of one of those stalks and just use three—one leaning to the left, one to the right, and one in the middle—it looks much better and more aesthetically appealing. (Five works too, but that depends on the size of the vase, and also this wasn’t a flower arranging tips post so I’ll stop now.)

I bet you didn’t know I had a flower arranging flair. 😉

Same applies in this case. One face in the bottom middle, one on the top left, and one on the top right. It forms that neat sort of triangle and appeals to people even if they don’t realise the technicalities of why it does.

Obviously that doesn’t apply exactly the same for all collages. Sometimes I have only one picture with the character’s face, for example. But it does apply in the size and shape and colour as well as the subject of the images.

That’s pretty much how I make my collages. Now you can all go and steal my ideas and use a better program and your collages can be even better than mine. XD

Do you like making aesthetic collages? What program do you use? What’s your method and go-to layout for story/character collages? Hang out with me in the comments!

[NOTE: I won’t be posting this Friday as I’ll be away at the beach with a bunch of friends. I’ll be back again next Tuesday though. 😉 ]