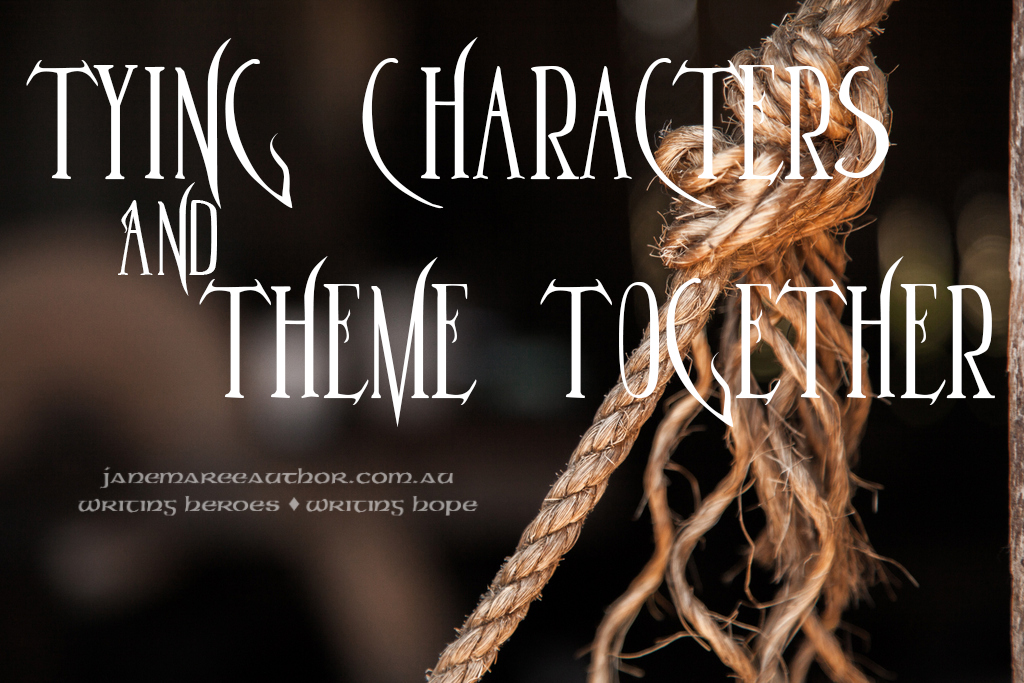 Unique and realistic characters are something we all strive to write. No one wants to hear that the readers can’t connect or care for the characters we worked so hard on and spent so much time with. So we try to make them unique. We give them quirks and personality and struggles and fears and dreams and—

Hold on, Jane, what on earth does this have to do with theme?

Good question. First off, if you missed my first three posts in this series, you can check them out here, here, and here. If you didn’t miss them but have a similar memory to mine and can’t actually remember what they were about, feel free to duck over to the most recent one and skim over at least the end to refresh your memory.

“In some respects, we might even go so far as to say that character arc equals theme.”

I know I said this in almost every other post on theme but this is one of my favourite parts ever because I love characters and character development and it’s just all so much fun. 😉

Going back to my previous post about Experiments in Living (the world view, or answer that the character gives to your focusing question), we see that our example character—John—starts of the story hiding away and waiting for the darkness to go and the hope to miraculously spring upon him. If we were to write a story all about John while he’s just chilling out in his little man cave…it’s going to be a boring story.

John will just end up sitting around hiding the entire time. Who wants to read a book like that?? (hint: no one)

Like I mentioned in the introduction—we want dynamic and interesting characters, so if they just stay the same the entire novel, it’s not going to be good enough. This is why character arcs exist.

A character arc is what happens when a character begins the story with one Experiment in Living (EiL) but changes over the course of the story to believe a different EiL by the end.

This means that while John starts the story hiding in his man cave, by the end, he might be charging across the battlefield screaming like a hoon and waving the battle pendant of his fight to restore hope and peace to the galaxy. Now, doesn’t that sound way more interesting already? 😛

In other words, John begins with the EiL that it’s best to leave hope until after the darkness is gone, but the elements of the story—events, side characters, villains, plot—make him realise that, in fact, his original EiL was false and doesn’t work, and instead he comes to believe that he has to fight to bring hope back.

Note: Character arcs can be the transition between two or three or four (or more) EiLs. I’m just using a simple two-experiment example.

It seems fairly straightforward, but there’s more to writing character arcs than just making them change their mind in the middle of the novel. First of all, does it sound realistic for John to suddenly decide that hiding isn’t the good solution and he should go out and fight for hope instead? No.

Change is hard and it’s not going to happen instantly.

In real life, we have bad habits or wrong beliefs. How easy is it to change one of those? Think about last time you had to change the way you lived. Was it instantaneous, or did it take a lot of hard work and struggling over many days and weeks and maybe months and years?

John won’t just up and decide he was wrong. No one likes to admit that. So he needs a good reason. A good nudge toward the right direction.

A good motivation/reason to change.

No one will change easily, so when they do, they must have a huge push to do it. Some examples of what could push someone to change:

Slow and Steady and Hard Work

Frankly speaking, even with one of those elements pushing John to change, he’s not going to like it. It’ll be hard work. It’ll be slow. It’ll be an internal struggle to make sure that this new EiL really is the right one.

When writing a character arc, you can’t make them change instantly because in real life people don’t change instantly. In a novel, the basic sketch will look something more like this:

1st half: John believes that he should hide until hope comes, but it’s not working out for him and he begins to doubt.

2nd half: John comes to discover that this new EiL might be better and he strives to follow it, failing a lot, struggling a lot, but trying.

Climax: John fully commits to the EiL (to fight for hope instead of hiding until it appears), even to the point of sacrificing something he deeply cares for or wants so he can do what he now believes is ‘right.’

By the resolution of your book, John is fully transferred to EiL#2, but that doesn’t mean he’s instantly perfect. He’ll always struggle, but the point is that now he’s committed to doing life this way and not the way he used to, no matter how tough it is.

The point of a character arc is to take your readers in that personal development journey. To draw them into the character’s experiences as he learns how to better live his life. This is how a theme can impact your readers in a meaningful way. The EiL that your character ends up with is your message. You show (not tell) your message through that character development, which leaves you with a much more potent method than simply slapping it in your reader’s faces the entire time.

Obviously, this is an example of a positive character arc (where John learns better) but there are other sorts of arcs. Negative arcs and flat arcs. A negative arc is where the character starts with a good EiL and ends with a bad one (or starts off bad and ends up worse). It has basically the same method as a positive arc—slow and steady with a good reason for change. A flat arc is exactly what it sounds like. An arc where the character starts with a positive EiL and sticks with it the whole time.

This actually brings me to the end of my planned theme posts (though I have a final post with my top recommendations for theme—probably near the beginning of next month). I could go further, but this isn’t meant to be an intensive course on theme. It’s just the beginning of theme, but I hope it’s made you a little more confident in your own writing ventures. If you do want me to go into another specific part of theme that I haven’t covered, don’t hesitate to ask!

Chat with me! Do you enjoy writing and plotting out character arcs? Are there any other aspects of theme you want me to do a post on? What is your favourite part of theme?

Have you ever seen or been IN a musical? . Every y

You enemies are attacking: do you pick a sword or

What are you currently reading? . /Mortal sight, b

Did you grow up as a bookworm? . I’ve loved book

Do you read many books about mental health/suicide

If you could have any super power, what would you

When was the last time you stepped out of your com

If you found a mysterious old mansion, would you e

If you had a chance to visit space, would you take

Do you ever collect different editions just becaus