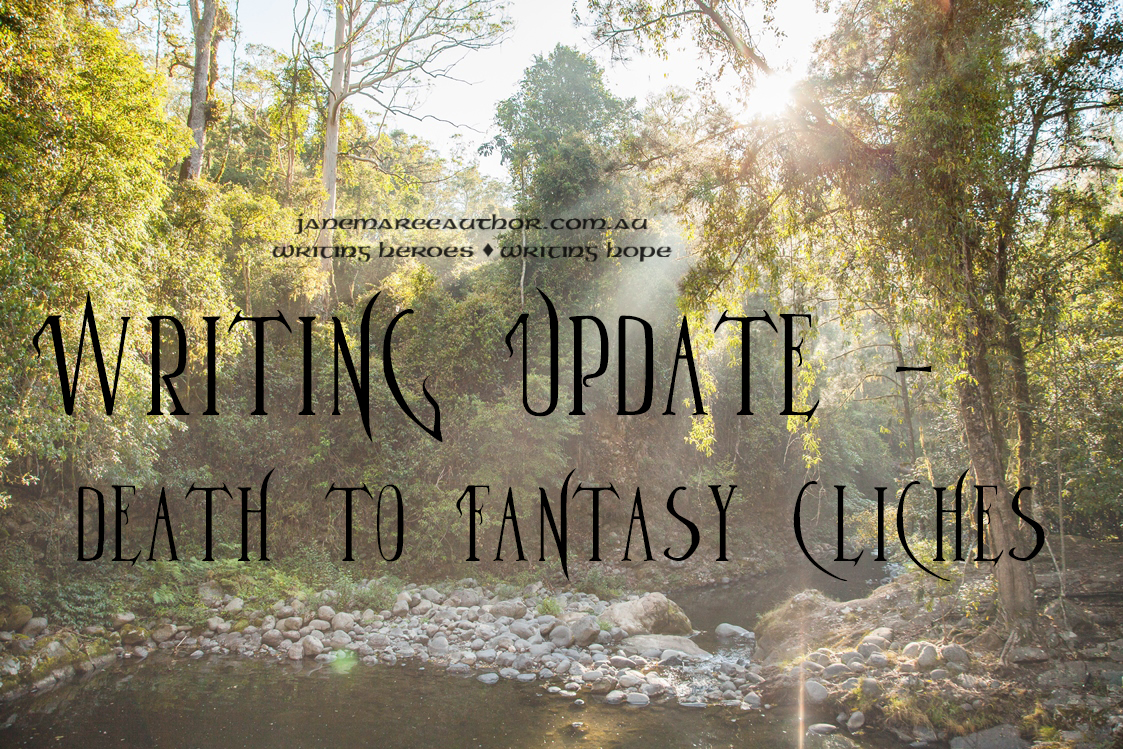 Long story short, I finished my edits at the end of February so I’ve been writing a brand new first draft this month instead. PRINCE. *throws all the confetti*

I spent half a week (give or take) working on a plot for this project, and after several brainstorming sessions and headdesks I worked it out. In short, it’s a fantasy novel about a snobbish prince, a damsel in distress, dragons, adventure, true love, sheep, and pretty much every cliche I could manage to fit in there. 😛 I’m discovering that it’s one of the most fun things ever to put cliches in a story and have the characters rip on them.

Prince Kal is sent off a-questing to rescue his damsel in distress, but little does he know that someone else has beat him to her already. Someone with a plan much larger and more devious than riding off into the sunset.

The trap is set, the bait is laid, and a story like never before is about to spring on this land of once upon a time.

Originally I planned to write the whole of this novel in March—and normally that’d be fine for me and my insane writing speed—but I’ve been taking it a little slower and not trying to push myself very hard. However, some words have been written and I have been enjoying it so far.

Planned number of chapters: 42 (ish. It’ll probably end up slightly different though, because I follow my plotting loosely at times 😛 )

Nights past midnight: 0!! (this is a new record for a first-draft-writing month!) 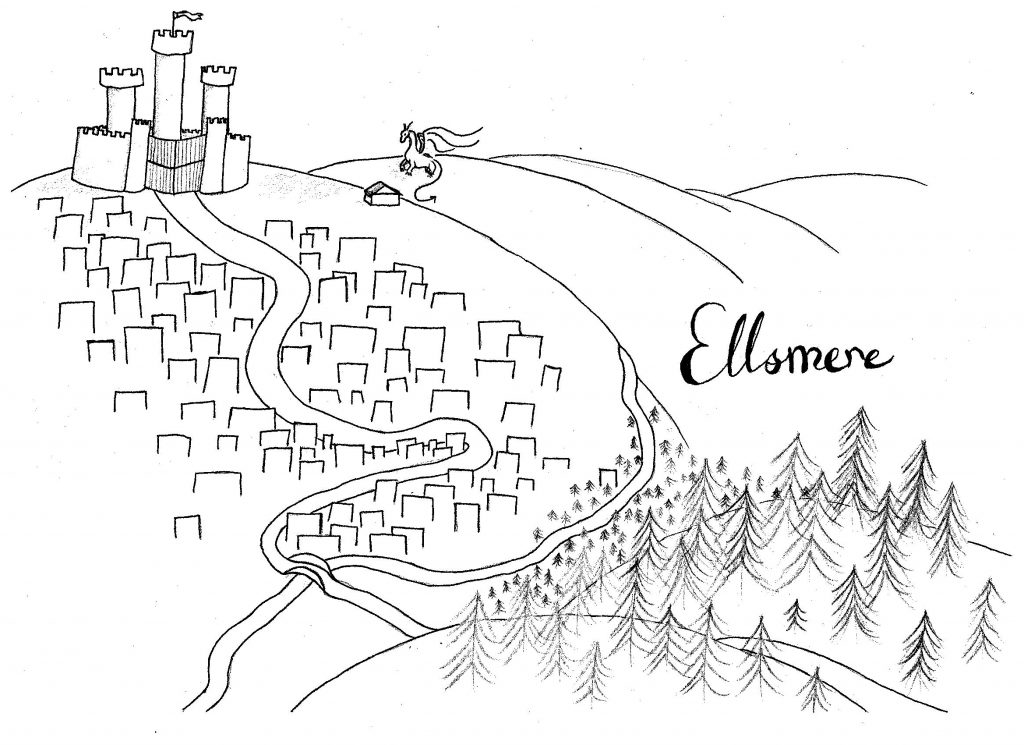 This was actually my first ever attempt at a slightly 3-D map, so I’m quite pleased with how it turned out. As you can probably guess, it’s a map of Ellsmere, which is the capital of Linnrylon. I’m still tossing up whether I should ‘paint’ it in photoshop or not. (And can we just admire my hand-lettering for a moment? I was quite proud of that. 😛 )

Since I’ve written 11k in the first six chapters, and if there ends up being forty-two chapters with approximately the same amount of words, this might end up at about 80k which is quite a nice length. That said, I might add more chapters in than I have planned and I might combine one or two others so it’s only a rough guess at the moment.

But that’s enough talking for now because you’ve been waiting for something else, I’m sure. As soon as I start sharing about my WIPs I just start throwing out snippets like crazy. Today I only have ONE, but I hope you can enjoy it, nonetheless.

Also, bear in mind that this is a first draft so there’s 10000% going to be mistakes/typos/bad phrasing in this because I’ve barely skimmed over it since writing it the first time.

Please welcome Prince Kalmin Murdoch Cynfael Angwen II, Heir to the Kingdom of Linnrylon as he complains about how much the world hates him.

I slash the sword again, testing the balance. The dulled edge slices through the air smoothly, but without anything to hit it just doesn’t have the same effect. The tenseness in my jaw aches but I don’t bother try relax.

Rescue the damsel, my foot. Why on earth should I have to do this when there’s a hundred servants at my beck and call who I could order to go fetch her? Or, even better, I could marry a peasant just to rile father.

A sigh huffs out between my teeth and I toss the practice sword viciously at the ground. It thuds, point down, buried into the earth. A startled sound from behind brings me around and my new manservant straightens.

The armour piled in his arms clatters at the movement and one vambrace slides out of his grip and lands on his toe.

I smirk as he winces, then jerk my thumb at the armour. “Well. It won’t do any use in your hands. I’m meant to be wearing that stuff.”

He ducks his head slightly. “Yes, sire,” he mutters, shifting his grip and dumping the armour in a heap.

“Careful—” I snap, shooting him a glare.

He hesitates, but then bows slightly. “Sorry.”

“Sire,” I add with strong emphasis. “Obviously you needed a little more training before becoming my servant.”

He makes a coughing sound and then drags my chain mail surcoat from beneath the pile and holds it up. I duck my head and he practically drops the mail on top of me. The weight evens out as I let the surcoat slip down over my shoulders with a off-side snap at my servant.

I should probably remember his name. It was something ridiculously simple. No fair. Why couldn’t he have my name?

He continues fastening the pieces of my armour as if he has no idea what on earth he’s doing. A farm worker, no doubt. Thinking to find his fortune in the city. I snort aloud and the servant looks up through the strands of dark hair, eyebrows raised.

“I don’t have all year,” I huff as he fiddles with the last vambrace.

His tongue appears between his teeth and he hunches over my forearm for another century. Or half minute. Whatever. Finally, he straightens and I pull away, twisting around and wrenching the sword from the ground. With the weight of the armour and the leather-wrapped hilt biting against my palm, I fall into a fighting stance.

Recap my day so far: my breakfast was cold because my new manservant was late bringing it to me, my servant also knows nothing about armour or proper protocol, my dad is sending me off to find a damsel in distress, and apparently I have to leave today. And to top it off the sun is blinding me.

Explanation: the world hates me.

But that’s okay, the feeling is mutual.

Kal is good fun to write. He complains about everything and is probably one my of most insufferable characters—but that’s okay. There’s hope for him yet.

Let that collage give you hope for this grouchy, stuck-up character. It’s set at the end of the story, so he’s a lot nicer. 😛 At the beginning of the story, he’d be quite willing to stand by and watch ‘him’ die. In fact, he does.

But that’s a spoiler.

I’ve also got a collage for the manservant, because he’s also a major character. 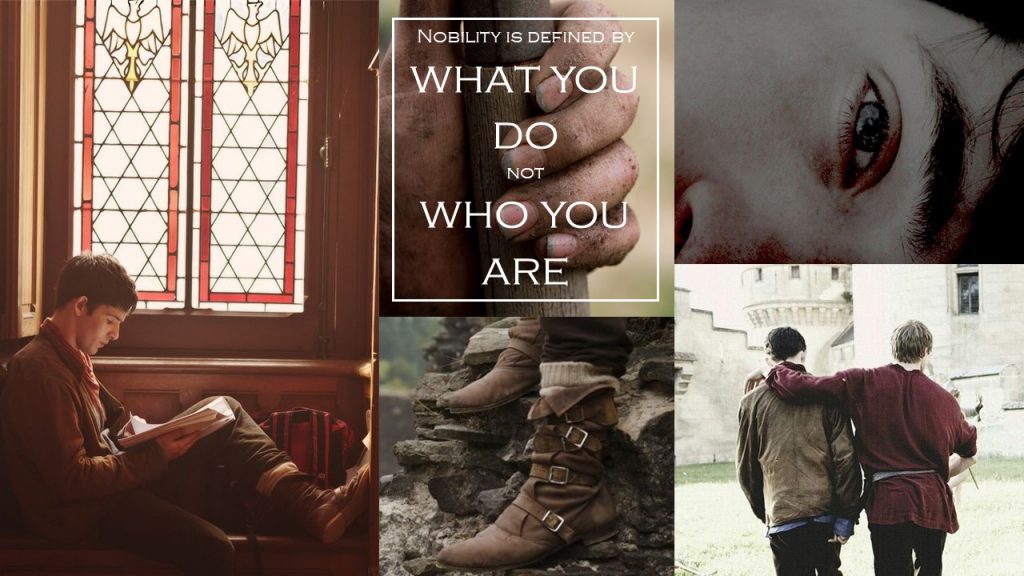 He’s the lucky boy who gets a flat character arc. 😛 But also the unlucky boy who has to put up with Prince Kal for the longest.

He may or may not go through some tough times during this story. *pats his head sadly*  A moment of silence for my long-dead dream of being a nice author.

What about April Camp NaNo?

Since it’s taking me longer to get through PRINCE, I’m not expecting to finish by the end of the month. I’ll probably just stop wherever I’m up to and leave it for a while. Maybe I’ll come back to it every now and then through my edits when I’m tired of revising sentences and thinking about what I’m doing. But for the most part, when March ends, I’ll be putting this aside temporarily. I’ll probably finish it before July though, Lord willing. 😉

What does this mean about camp NaNo? Yes, I’m still participating, have no fear. I’m just going to be utilizing one of NaNo’s new changes. I’ve got a goal of pages (the whole of ASoG) which I hope to get through in April.

So, I’ll be back into edits again—but I’m going to be doing it in a new and exciting way. *dramatic music*

(Photography credit to my sister)

I got ASoG printed off in a spiral bound copy from Lulu! *screaming* I’m going to be working through that actual physical book and highlighting and writing notes and fixing all the problems, and I’m really looking forward to it (credit to Katie Grace for inspiring me to try this method). I got it double spaced, so it’s a little longer than it normally would have been, but seeing the original novella and this (full novel length) draft next to each other still makes me flail.

Look how skinny that first draft is. 😯

Anyway, as I said, I’m sooo excited to get into edits again. In fact, when the book arrived in the mail part of me wanted to up and edit immediately, but I forced myself to wait and keep going with the plotting/writing of PRINCE.

But Camp NaNo is ONLY ELEVEN DAYS AWAY NOW. Who’s excited??

What have you been working on this month? Do you like drawing maps? Are you going to be participating in Camp NaNo this April?? Chat with me in the comments!

If you could have a totally different career, what

What are you currently reading? I’ve just finis

What’s a sequel you loved more than the first bo

What’s a book that people often recommend to you

What are you currently reading? @gillianbronteada

What is your favourite season and WHY? All my Ame

What’s something unexpected about you? I’m pu

Are you an indoor plant fan? 🪴 Please give a w

#EDITTIPS You are a boss author 🖋 It’s been

Would you rather…be a space pirate captain or th

Do you collect anything other than books? Last we