Here’s a fun fact for you: before I started this website, I had a different blog for four years. In all those four years I never did a cover reveal.

And now. Here I am. With…yet another book that is soon to be released into the wild of published-dom. 😯

I’ve had the pleasure of knowing Hope Ann for a while now, and consider myself an expert stalker of her books. Her set of the first three Legends of Light novellas—Burning Rose—was a wonderful read, but now, from the depths of her writing corner, Hope has emerged again and this time she’s got book four.

A quick official bio before we dive right in.

Hope Ann uses chocolate to bribe a wide ring of spies, from the realm leapers of Aslaria to the double agents of Elkbend, for their stories. Based in Indiana, she is the self-published author of the Legends of Light series, personal writing coach, and the Communications Coordinator for Story Embers. You can find out more about her at authorhopeann.com

That bio absolutely leaves out the witty humour and sarcasm and friendliness that Hope brings wherever she goes, so you’ll have to pardon the official tone. 😛

BUT NOW. You know what we’re here for. A dashing cover for this dashing novella.

(Not 100% convinced that was the word I was looking for, but hey, I’m just going to go with it anyway.) 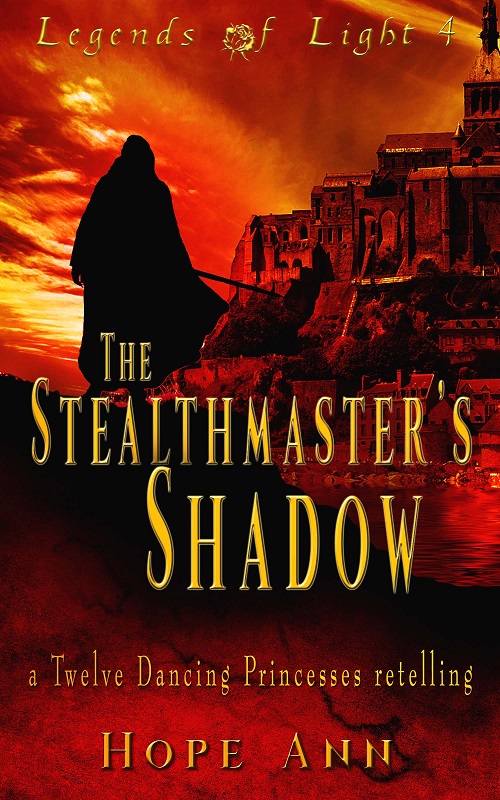 Ten years since the Prince won the war and pardoned the rebels.

The Prince left, but lasting peace never had a chance to begin.

As a Stealthmaster, Verus is determined to complete the task the Prince left, whatever the cost. Traitors, needlessly vague governors, and threatening rumors are all part of a standard mission. Verus will bring peace to what is left of the world, one city and village at a time. According to the governor’s daughter, the war was never about a physical peace in the first place, but what does she or any of the other Followers know? They weren’t there during the war.

They didn’t see the horrors Tauscher spread over the land or the scars that will never fade.

Commandeering the task of a former soldier, Verus presents himself to the governor of Nerva. Eventually he’ll need to undermine the man, but even Stealthmasters need money, and a mission to discover the owner of a misshapen slipper shouldn’t be difficult.

Until the ambassador from Zahavia appears.

Suddenly face to face with nightmares from the past, Verus struggles to help those plunged into danger, from the governor’s newest prisoner to a serving lad to an infuriating woman he’s taken to calling princess. Fleeing will only make the enemy stronger. But staying…

Staying could doom them all.

A huge round of applause to the cover designer Kate Flournoy, and if that blurb doesn’t make you interested to read this story…obviously you read it wrong. Go back and read it again. XD

I’ve had the pleasure of reading this novella, and it was such a fun story. Hope has a distinct writing style and her personal voice is really well developed.

The characters in The Stealthmaster’s Shadow are so much fun. Verus has a tough background, but he’s not one of those dark brooding characters and it makes him all the better for it. He’s sarcastic and witty and his personality instantly captured me right from the first page.

I love the twists and quirks through the story, and how she adds in nods to the original fairytale in unexpected ways but still has them tie in perfectly with the plot and theme.

Overall I really enjoyed this book and it was a great read. Absolutely recommend! 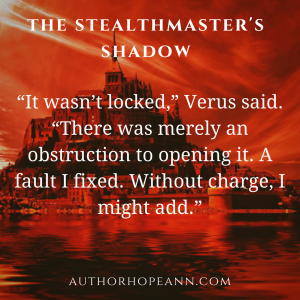 Before you ask—we have a release date, so get ready to mark your calendars….

While you wait, go ahead and add it on Goodreads and pre-order it from Amazon!

Pros: it’s an ebook so it’s not going to dig a hole through the bottom of your wallet.

Cons: it’s…an ebook. So it can’t look epic on your shelf. *many bookdragon tears*

Pros: you won’t have to reorder your bookshelf though. 😛

Don’t forget to go check out Hope on her website and leave her a comment to say hello. I promise she’s a nice person. 😉

Let’s chat! What do you think of the cover? Have you read any of Hope’s Legends of Light series? Which do you prefer…ebook, or hardcopy?