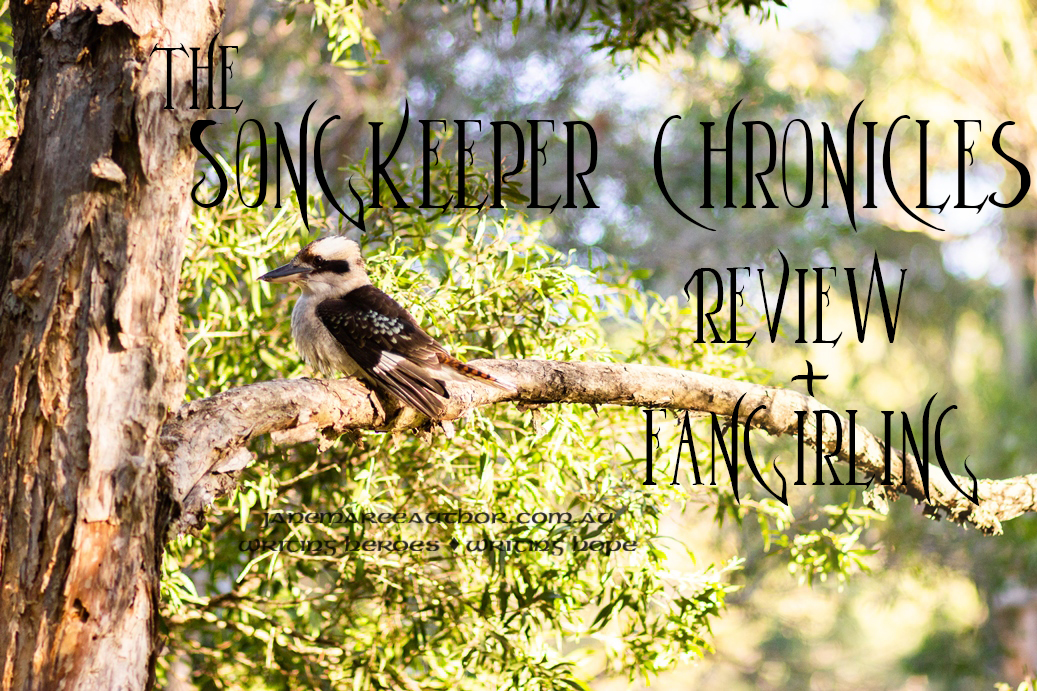 A couple of months ago, cover reveals were rife all over the blogosphere. I did several myself too. Time has passed and the looooong wait for the book releases is almost!! over!!! *shrieks*

Flashback to when I did the cover reveal for the amazing cover of Song of Leira—the third and final book in this amazing trilogy, and, coincidentally, the book that is releasing in FIVE DAYS. 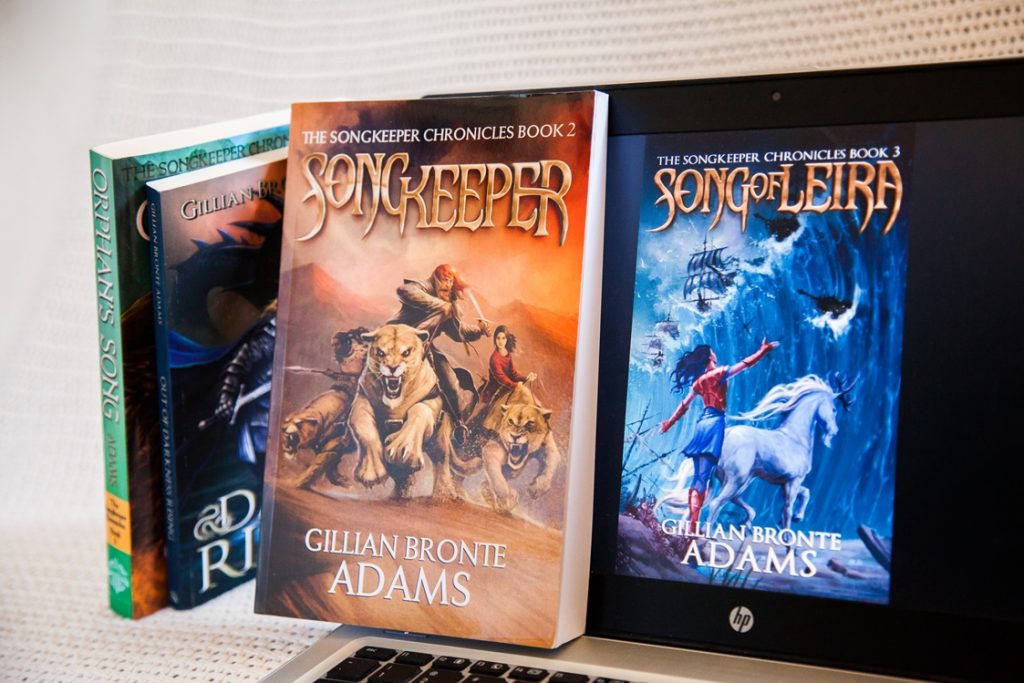 I am very pleased to say that I received an ARC of Song of Leira so I’ve actually read this gorgeous novel but the wait is still on because a) the author sent me an ebook ARC to read while I waited for the physical arc to reach Australia and…it’s still not here so I’m still waiting. And b) I preordered this book several months ago and the wait is almost over.

In other words, I’m going to own three copies of this book very soon. Because why go semi-fangirl when you could take over the world and turn into a crazy flailing book dragon? 😛

Today, in honour of Song of Leira‘s upcoming launch, I’m going to do a review of the entire trilogy. By the end, I expect you to be scrambling to find these books because they’re well worth it. Before we get started on the review, meet the wonderful author, Gillian! 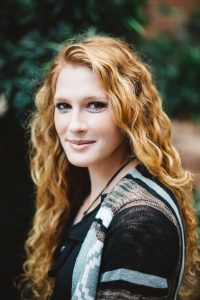 Gillian Bronte Adams is a sword-wielding, horse-riding, wander-loving fantasy author, rarely found without a coffee in hand and rumored to pack books before clothes when she hits the road. Working in youth ministry left her with a passion for journeying alongside children and teens. (It also enhanced her love of coffee.) Now, she writes novels that follow outcast characters down broken roads, through epic battles, and onward to adventure. And at the end of a long day of typing, she can be found saddling her wild thing and riding off into the sunset, seeking adventures of her own (and more coffee).

She loves to connect with fellow readers and wanderers online through her blog, Facebook page, newsletter, and Instagram. Orphan’s Song (Book 1) Her solo is a death sentence. When Birdie first hears the Song coming from her mouth, her world shatters. She is no longer simply an orphan but the last of a hunted people. Forced on the run, she must decide who to trust: a traveling peddler, a streetwise thief, or the mysterious creature who claims to know her past. With war threatening to tear her homeland apart, Birdie discovers an overwhelming truth: the fate of Leira may hinge on her song. Songkeeper (Book 2) War ravages Leira & the Song has fallen silent. Desperate to end the fighting, Birdie embarks on a dangerous mission into enemy territory, while Ky returns to his besieged city to save the Underground runners. Legend speaks of a mythical spring beneath the Takhran’s fortress and the Songkeeper who will one day unleash it. Everyone believes Birdie is the one. But can she truly be the Songkeeper when the Song no longer answers her call?

The Song bids her rise to battle. 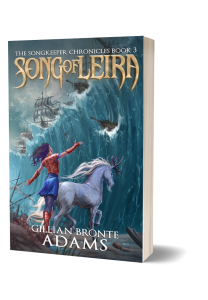 Reeling from her disastrous foray into the Pit, Birdie, the young Songkeeper, retreats into the mountains. But in the war-torn north, kneeling on bloodstained battlefields to sing the souls of the dying to rest, her resolve to accept her calling is strengthened. Such evil cannot go unchallenged.

Torn between oaths to protect the Underground runners and to rescue his friend from the slave camps, Ky Huntyr enlists Birdie’s aid. Their mission to free the captives unravels the horrifying thread connecting the legendary spring, Artair’s sword, and the slave camps. But the Takhran’s schemes are already in motion. Powerful singers have arisen to lead his army – singers who can shake the earth and master the sea – and monsters rampage across the land.

As Leira falters on the verge of defeat, the Song bids her rise to battle, and the Songkeeper must answer.

Add Song of Leira to your Goodreads Shelf

I enjoyed every moment of this book. Right from the start, the characters were so clear and realistic and I really connected with each of them.

Ky was definitely my favourite character and I really liked his POV chapters.

Orphan’s Song stands out as a beautiful story in the midst of the ordinary ones. It’s the kind of book I wish I’d written.

ARCs are officially awesome. I was barely able to put this book down as soon as I got it. Songkeeper has kept up the amazingness of Orphan’s Song, adding to it, even.

This book had me literally jittering from epic-ness (or maybe that’s just my normal hyperactive self xD). The pace never slackens for a moment, and it’s page turning the whole way. I can’t put the amazingness into words! Everything about this book is impossibly and completely great and epic.

This book takes a darker turn, looking into the pain deeper, as the characters experience it in different ways. The pain of the characters made them more real.

And speaking of characters, they were all amazingly real, relatable, and just plain awesome. To start off the awesomeness we have the unique but pronounceable names: super great! Add that to complex personalities, struggles, and pains. I was drawn ever deeper into the lives of all the characters. But…Ky is still my favourite. xD

As the finale of the trilogy, Song of Leira is overflowing, cover-to-cover, with glorious breathtaking awesomeness. I had high expectations for this book, and I wasn’t let down at all.

The whole book is a bit of a blur because I just couldn’t stop turning the pages. The first act was a little slow action-wise, but even through that the tension was strung taut beneath every scene.

The characters are still so amazing. And the favourite character award goes to…Ky. KY FOREVER. I just love him so much. I really connected with him and how he was trying so hard, even though he kept making mistake after mistake. Because don’t we all feel like that sometimes??

As I mentioned, the first act was a little on the slow side, but overall the novel was still action packed. There were several moments when I’m pretty sure I stopped breathing. Also: there’s a lot of feels. I almost died. 😯

The climax absolutely met my expectations. It was one of those tricky things that are balancing on the edge of being disappointing, but wonderfully aren’t. There are always going to be people who will say it wasn’t good enough for them, but I am satisfied.

Every single one of these books got a shiny five star rating from me and I absolutely and utterly enjoyed them. I will put a small note that I recommend these for 13+ as the books do have some violence and darkness, but ultimately the good wins in the end. 😛

To end I shall quote myself from my review of Songkeeper, because it still stands now that I’ve finished the series:

My recommendations for these books are flooding out over every single person ever.

That about caps off today’s post, but there’s one last thing…a facebook party! Gillian Bronte Adams and Jill Williamson (another epic and amazing author) are teaming up for a special event full of giveaways, prizes, and games! (No idea if they’re international or not, but what’s the harm in hoping??) Check it out, and RSVP on the event page!

Let’s chat! Have you read any of Gillian’s books? Will I see you at the facebook party? Tell me about your favourite fantasy series!