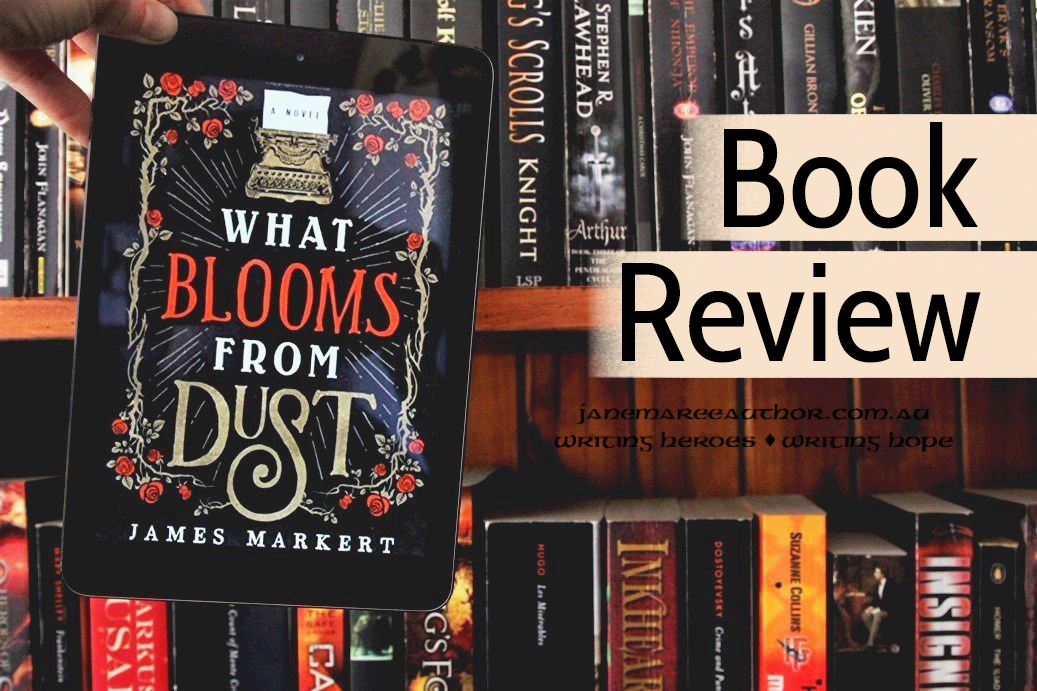 One of my favourite parts about being a reader is when I read what I thought was just a general book and then it smacks me in the face and jumps onto my favourites list right away. There’s nothing like a happy surprise. 😛

What Blooms From Dust was one of those sorts of books, and I’m SO glad I picked it up.

James Markert is a novelist, screenwriter, producer, and USPTA tennis pro from Louisville, Kentucky, where he lives with his wife and two children. He has a history degree from the University of Louisville. He won an IPPY Award for The Requiem Rose, which later became A White Wind Blew. He is the writer and co-producer of the new feature film and tennis comedy, 2nd Serve, starring Josh Hopkins from Cougar Town.

Just as Jeremiah Goodbye is set to meet his fate in the electric chair, a tornado tears down the prison walls, and he is given a second chance at life. With the flip of a coin, he decides to return to his home town of Nowhere, Oklahoma, to settle the score with his twin brother Josiah. But upon his escape, he enters a world he doesn’t recognize—one that has been overtaken by the Dust Bowl. And the gift he once relied on to guide him is as unrecognizable as the path back to Nowhere.

After one jolt in Old Sparky, Jeremiah sees things more clearly and begins to question the mysterious circumstances surrounding the murders he was accused of. On his journey home, he accidentally rescues a young boy who follows him the rest of the way, and the pair arrive at their destination where they are greeted by darkened skies and fearful townspeople who have finally begun to let the past few years of hardship bury them under the weight of all that dust.

Unlikely heroes, Jeremiah and his new companion, Peter Cotton, try to protect the residents of Nowhere from themselves, but Jeremiah must face his nightmares and free himself from the guilt of his past and the secrets that destroyed his family.

What Blooms From Dust is historical fiction set in the Dust Bowl, with a supernatural twist; an instantly gripping and high-stake story. The main character Jeremiah Goodbye is trying to escape the dark secrets in his past, but there’s no running from something that’s part of you.

When I first picked up this book, I wasn’t expecting this to become one of my favourite reads of the year. I was just hoping it’d be decent, but then I was sucked right in and taken on a crazy adventure.

What Blooms From Dust is a perfect example of why everyone should read out of their comfort zone once in a while. I rarely go for historical fiction, so I wasn’t sure about this book at first, but it hooked me right from the get-go and absolutely loved every moment of it.

The characters were stunning. From the very moment that Jeremiah appeared on the page, he already had so much personality and was so real. I loved all the characters and being a part of their story was the best thing ever.

Adopted father-son relationships are one of my favourite things ever, and there were a couple of scenes in this book where my heart was so warm and fuzzy. It was wonderful. There was some great romance relationships too, and they were done really well.

There’s a bit of mystery about the plot, and it’s only until right near the end that you find out the truth about everything, and I LOVED that. The whole concept was really intriguing and had me guessing the whole time.

Without giving away any spoilers…I adored the ending! It was just perfect.

This book completely flipped my expectations on end, and had me wanting more with every chapter. If you haven’t tried this yet–give it a go! Absolutely recommended.

NOTE: I received a complimentary copy of this book from BookLook Bloggers in exchange for my honest review.

What books have you read recently that are out of your bookish comfort zone? When was the last time you were pleasantly surprised by a book? Chat with me!