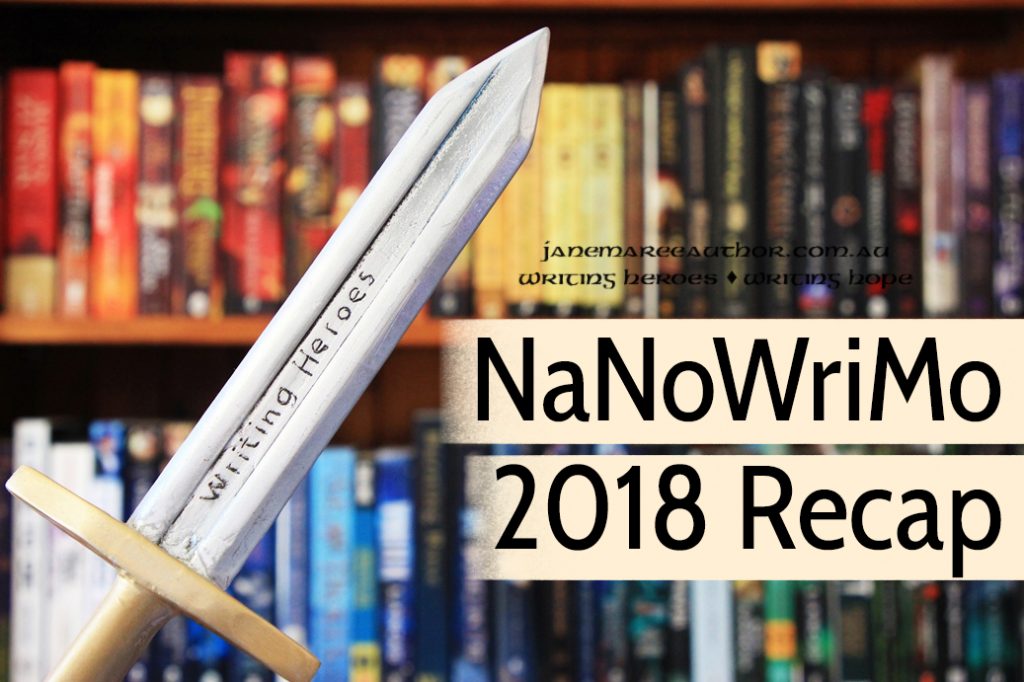 Sometimes NaNoWriMo eats your blog schedule, hat, coat, feathers, and all. I had good intentions to hit 50k on Friday, then write this blog post right afterward. I did hit the 50k, but then I forgot all about the blog post part until almost ten at night. It just one of those things.

Seriously, November has been a whirlwind. Between editing, a homeschool conference, events, and a million other projects and happenings, I feel like I’ve barely had a day off for quite a long time.

Now it’s over and I’m honestly not sure if it feels like a really short month or a really long month. I’m living in a paradox. 😛

Despite the busyness, NaNoWriMo was still a thing and it was a wild ride. My typical NaNo experience in the last two years is that I sit down and pound out words like crazy, hit 50k on day ten, then keep on writing until I finish my novel in approximately another ten days. The first draft is a messy pile of typos and mistakes.

This year was completely different.

I spent most of October doing edits and revisions on the fourth draft of another novel, then scraped up a rough plot of Rogue Agent in the final few days of the month. I stayed up until midnight on the 31st so I could start writing as soon as the clock ticked over to November.

Then in the first fifteen minute word war, I found myself writing in a completely different mode to normal. Instead of pounding out words in a messy pile of rubbish, I was writing at about half my normal speed, and the quality was coming out at a third draft level, at least.

At first I didn’t think it would last, but here I am at the end of the month and I can confirm that it did last. I wrote much slower this month, but it was about the quality, not the quantity. I’m actually still amazed at how well this first draft is turning out.

The graph tells the story of my month nice and visually. The first two days were great, then I got busier, then fired on! Then dropped back…then struggled back to catch up again! And fell behind yet again. 😅

I spent half of the month not sure if I was going to win NaNo, even up until the day before yesterday I wasn’t totally sure. And that was okay. Not hitting 50k isn’t the end of the world. I’m so thankful that I was able to trust that God had the whole month in his hands and just rest in his goodness.

Yesterday, I did hit 50k and officially won NaNo. I haven’t finished the novel yet, but the climax is creeping up onto me and will be pouncing anytime.

I’m enjoying this book SO MUCH. I love the characters, I love the style, the theme, the plot, the setting. It’s all just so much fun, so picking a favourite part is hard.

I also haven’t finished it yet, and I’m expecting the climax to be a wild ride and hopefully a highlight too. But here are some things I’ve especially enjoyed about Rogue Agent.

I’m not going to give away too much about the story, but I couldn’t help but share some of my favourite snippets. 😛

I crossed the road and directed my path toward the nearest train station. “Okay. You said you knew where Will was?”

“Sure do, kiddo.” McNoodles clicked his tongue. “Second to the left, then straight on ‘til morning.”

“I want an actual address, not a peter pan reference.” I slowed my pace slightly to blend in with all the other pedestrians on the footpaths. “Come on, please.”

“Sounds good.” The hotel owner glanced back at me, then returned his gaze to Will. “Well.” Rob clapped his hands together. “I’ll leave you two to some father-son time.” He turned and headed back down the hallway.

I stared at the doorway past Will’s back. Wait what?

Will slowly swivelled and looked at me, forehead furrowed. He opened and closed his mouth for a moment, then pointed back over his shoulder. “Did he just…?”

I gestured between us. “I think he…”

“He just said that, didn’t he.” Will stared at me for another second, then turned away and dragged a hand over his face. “I was going for a brother thing, but,” he stopped, puffed out a breath, and rubbed his face again. “Wow.”

Next, I’m going to finish this novel! I’ll hopefully dust it off in the next week, then be able to take the rest of the month off to breathe. Or to be overwhelmed by all the other Christmas-y things happening. 😂

Then before we know it, it’ll be 2019 and on to a new year of bookishness and adventures!

Let’s chat! Can you believe how close to the end of the year we are?? 😱 How was your November?

Have you ever read a superhero book? . From the mo

Do you enjoy retellings? . Okay I need a little sq

What big projects are you working on at the moment

Have you ever read a sci fi book with a map? . I f

Do you like going barefoot? . I'm so thrilled to b

What bookish world would you love to visit? . I th

What's a book that always makes you laugh? . It's

What's something you love about the bookish commun

“It is said that Darkness is empty and whatever

Have you read anything recently with a stunning si

What was the last book you reread? . After watchin

Do you have a favourite character trope? . I have