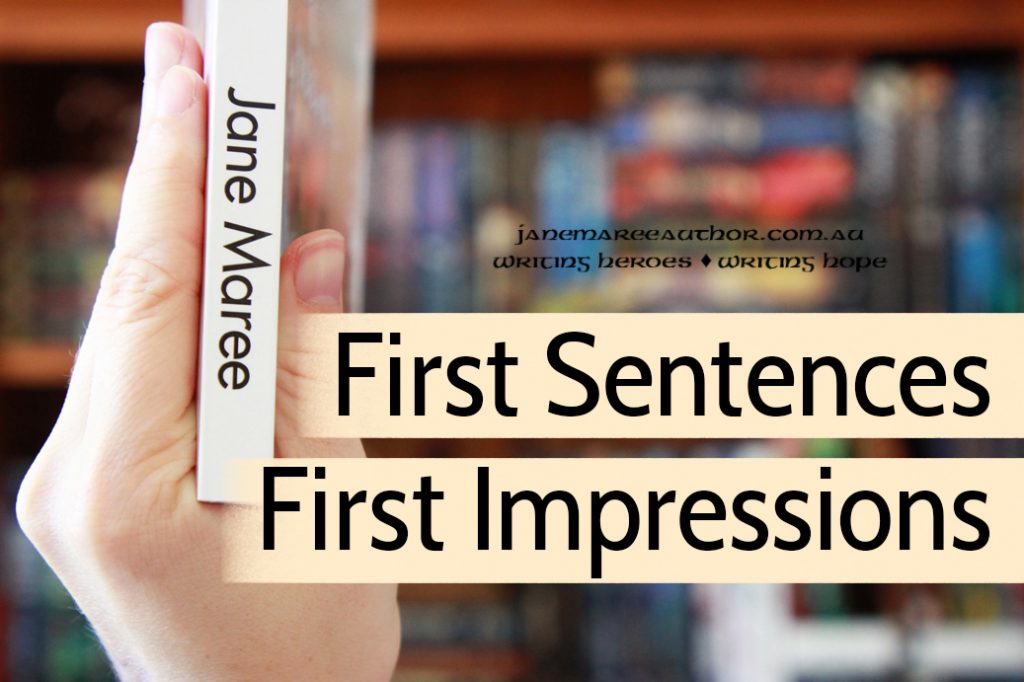 After the title, cover, and blurb, your first sentence is going to be the first thing about your book that will capture the reader and pull them into the story.

I’ve even bought books off first sentence impressions before. No pressure. 😛

It’s crucially important to have a good first sentence. And not just a good one, but an absolutely breathtaking one.

So it’s time to evaluate these important sentences and put some of the ones on your bookshelves to the test! This blog post could also be titled: ‘How to write a terrible first sentence 101’ 😉

1: Gripping and breathtaking…but a lie

Death tolled on the last stroke of midnight.

I waved my hands dramatically, flapped my blanket cape like it was really windy, then leapt off my bed with an evil cackle at my audience of bored siblings.

If you promise mystery or action or intrigue in your first sentence, you need to pay up. Readers will feel more cheated over a fake first line, than a more mediocre but true first line.

In the first sentence example, I promised an eerie sort of mystical story. I definitely got steampunk or historical fantasy vibes. Then in the second sentence, I threw that out the window and gave you a girl acting in front of her family. Two totally different things. That might be a little extreme example, but I see less dramatic versions of this all the time.

2: Poetic and flowery and out of context

My tears are like a sonnet on the midsummer breeze, falling on the blissless ears of silence.

“Why is Mr Picket so darishly handsome?” I ask, twisting in my seat to direct the question to Lindsay.

While your first sentence can be poetic, it’s simply off-putting to have the second sentence have nothing to do with the first sentence, or be in a totally different style. I know this because I have done it. Many times.

It doesn’t work to write the coolest first sentence ever, try make it meaningful and memorable…Then in the next sentence actually start telling the story. It sounds good at first, but ultimately loses the impact it should have.

3: Talk about the weather

The sunset casts a golden glow over me, lingering like a half forgotten dream.

This example sentence is cool and intriguing, but it doesn’t actually give the reader a glimpse at what the book will be about, unless it’s a dreamy weather guide.

Weather might set the scene, but it doesn’t give the inner conflict of the story, a character to root for, or even a question to ponder.

A few of my examples might have been okay on their own, but in the context, they didn’t do their job like they should have. They grabbed the reader, only to drop them on the second sentence.

The first sentence is a promise, the rest of the book is fulfilling that promise.

I picked three books from my shelves to showcase their amazing first sentences. They give you questions, they make you interested, they give you a reason to keep reading, and then the books themselves absolutely exceed those promises with an even greater answer.

I wasn’t ready to turn to stone.

FAWKES (Nadine Brandes) sets up the story ingeniously. Thomas (the narrator character) is turning to stone, but he’ll do anything to stop it from happening. Perhaps even kill a king?

Look, I didn’t want to be a half-blood.

Percy Jackson and the Lightning Thief (Rick Riordan) gives an instant taste of the style and character of the entire series. That sentence sums up Percy Jackson’s character voice so well, and it is essentially a characteristic moment in just eight words. You know that you’re in for a crazy time.

Old Sparky was supposed to have killed Jeremiah Goodbye.

What Blooms From Dust (James Markert) starts off with this insane sentence. I read this book solely because of that line. I mean…Old Sparky? Jeremiah is supposed to be dead? But presumably he’s not, right? So how did that happen? The first sentence just throws it right at you, and the rest of the book is just as odd-but-amazing. I have no regrets in picking this one up.

There are probably many other ways to have less-than-excellent first sentences, but these were the few that I have used in the past and probably will use again, if I’m completely honest. 😛

I would almost say that fulfilling your promises is one of the most important aspects of storytelling. Subvert, but exceed the expectations, but always fulfill your promises.

Do you have any Easter traditions? . I almost can'

Have you been reading any dystopian/apocalyptic st

Do you love or hate phone calls? . 🎶Music Monda

Do you ever decide to read a book based on friends