One of my most anticipated reads of this year was Coral by the wonderful Sara Ella. I adore Sara and her Unblemished Trilogy, and as soon as I heard about her next book I was soo pumped to read it.

And Coral finally released into the great wide world this week!! So to celebrate, I’m sharing a quick review of my thoughts over this masterpiece!

There is more than one way to drown.

Coral has always been different, standing out from her mermaid sisters in a society where blending in is key. Worse yet, she fears she has been afflicted with the dreaded Disease, said to be carried by humans—emotions. Can she face the darkness long enough to surface in the light?

Above the sea, Brooke has nothing left to give. Depression and anxiety have left her feeling isolated. Forgotten. The only thing she can rely on is the numbness she finds within the cool and comforting ocean waves. If only she weren’t stuck at Fathoms—a new group therapy home that promises a second chance at life. But what’s the point of living if her soul is destined to bleed?

Merrick may be San Francisco’s golden boy, but he wants nothing more than to escape his controlling father. When his younger sister’s suicide attempt sends Merrick to his breaking point, escape becomes the only option. If he can find their mom, everything will be made right again—right?

When their worlds collide, all three will do whatever it takes to survive, and Coral might even catch a prince in the process. But what—and who—must they leave behind for life to finally begin?

Taking a new twist on Hans Christian Andersen’s beloved—yet tragic—fairy tale, Coral explores mental health from multiple perspectives, questioning what it means to be human in a world where humanity often seems lost. 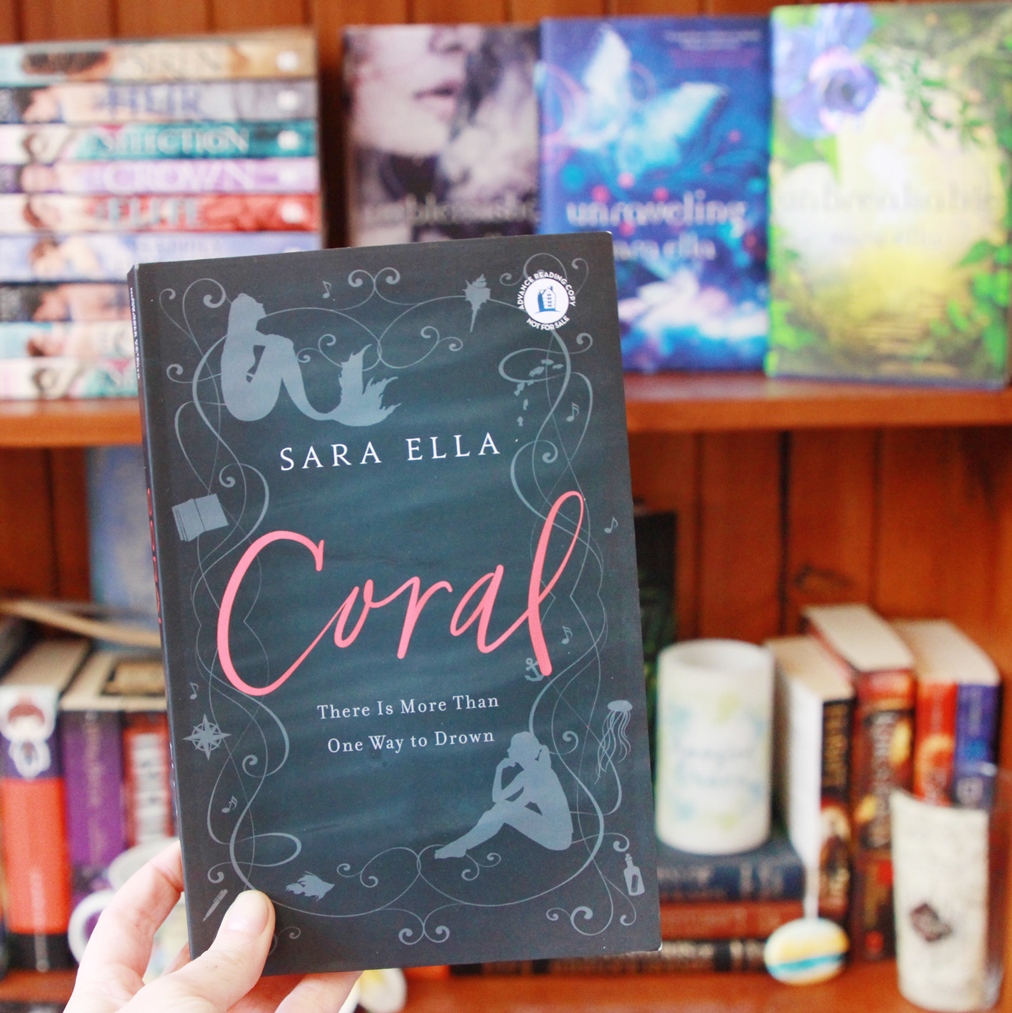 Please note that this book deals with some really tough subjects and could be triggering. Sara has a beautiful note in the front of the book which you should read before venturing into the story. I do recommend it for all (mature) readers, but please be aware that this has some heavy topics. Sara deals with the topics very well, and though there’s plenty of darkness in this story, there’s always light at the end.

Coral is such a raw, beautiful story. It left me breathless and desperately wanting more, yet it was so satisfying in what it was, and the ending!! It was so so perfect.

It’s an incredibly brave thing to do: to write a story like this about mental health. For Sara Ella to be vulnerable enough to pour her heart and soul into this story…It’s so personal, so touching, so powerful. And I love this story even more for that. Sara is such a dear friend to me, and I could see her in every moment of this story. It was just as much her story as it was Brooke’s and Merrick’s and Coral’s.

Sometimes, the side characters were a little more intriguing than the main ones, but I didn’t mind that. It just made the whole world and story feel more genuine and real, because everyone has their own story to live.

It’s not a fast-paced book. The story is really focused around the characters and their mental and emotional struggles and their internal journey more than any external action. Particularly in a few key sections, it can be very difficult to read, but the raw emotions, and the messy, real life in it are so well written. It’s not a fun book. It’s even a hard book, sometimes. But it’s so good, in a deep, soul-touching way. I can honestly say that this book has impacted my soul and changed how I see things.

There’s a complicated twist in the last quarter of the book, which (judging by other reviews I’ve seen) has thrown off a few readers, and I think there’s a few elements of this book which make it a ‘read it twice before you can fully grasp it’ book, but it’s totally worth it, in my humble opinion. 😛 I definitely have to reread this book before I can fully grasp the intricate soul of this story, and I’m looking forward to it.

It has captured my heart. It has inspired me in so many ways. It’s my prayer that it will do the same for you.

NOTE: I received an ARC of this book from Sara Ella and Thomas Nelson in exchange for my honest review. All opinions expressed are my own!

Have you read any great books recently? What was/is your most anticipated read of 2019? Let’s chat together in the comments!