It’s been a little bit since I last posted! Somehow the time got away on me, but I’m back and I’ve got a special guest today! A dragon guest, to be specific.

I’m joining in on the blog tour for Songflight by Michelle M. Bruhn. This book is releasing on the 21st and it’s an absolutely beautiful story based in the highlands with dragons and magic abilities and an ancient war. I’m sooo excited for this book to be out in the world so soon!!

(Also, there’s still time to preorder, and Michelle is offering preorder goodies too which you should totally check out.)

Let me give you the official blurb, then we’ll welcome Graydonn to the interview!

Alísa was born to lead her clan of dragon slayers, but her vocal stammer has robbed her of confidence and respect. If she can’t lead slayers, how on A’dem is she supposed to lead dragons?

As the only child of a dragon slayer chief, Alísa’s purpose should have been simple: lead the clan in ridding humankind of the dragon scourge. But while gaining respect from hardened warriors is difficult enough with a vocal stammer, when they learn her empathic powers connect uncontrollably to the dragon enemy, it becomes impossible.

Confidence shattered, Alísa resigns herself to silent service under her father’s apprentice. But when her growing connection reveals one dragon’s capacity for good, she realizes the war isn’t as black and white as the slayers teach. Now Alísa faces an impossible choice: stay with her family in comfortable but condemning silence, or follow the dragon claiming to know her true purpose. 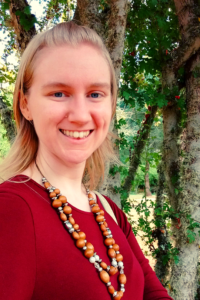 Michelle M. Bruhn is a YA fantasy author whose stories focus on outcasts, hard questions, and hope. She is passionate about seeing through others’ eyes and helping others to do the same, especially through characters with diverse life experiences. She finds joy in understanding others, knows far too much about personality theories, and binge-watches TED Talks on a regular basis. She spends the rest of her free time making and listening to music, walking, reading, and snuggling with her cats.

Hey, Graydonn! Thank you so much for joining us today, it’s been a while since I had a dragon guest, so it’s a pleasure to have you here. To start off, tell us a bit about yourself!

Thank you, Jane. I myself haven’t been among humans for very long, and I hope this conversation leads to better understanding between our races.

Now, where to begin? I hatched two summers ago. Growing up, I trained with each of my parents to help me discover my future role in the clan. My mother, Koriana, was a scout for our clan, so I’ve trained with her for aerial combat and speed. My father, D’lann, was a teacher for the hatchlings, focusing mainly on philosophy, though his wings were often pinned on that front. The alphas of our old clan didn’t always approve of his pacifistic teachings. Anyway, I lean more towards him in my desires for my own future, though Mother says I show great promise in the aerial arts.

I think it’s so cool that dragons speak with telepathy! What limitations are there on this communication?

Sightlines—you can’t speak to anyone if there are physical barriers between speakers. Distance also plays a factor, though that can be worked through with practice. Scouts like my mother often speak to scouts of other clans when they are still mere specks on the horizon, in order to avoid unnecessary confrontation.

Can you sing telepathically? (or do you leave that to the Dragon Singer, haha)

Alas no. I suppose that would be a limitation as well, one I would never have thought of without the question. The human voice is fascinating in the way it can sustain tone and words, then inject them with emotion. I’ve found even the voices of humans besides Alísa to be powerful in their own way.

Since the dragons and the slayers are long-standing enemies, what made you pause when you first met Alisa?

There were two things—the first indicator was her begging her father to kill me quickly rather than keep me to be tortured first. I know that sounds strange, since she was still asking for my death, but the mercy of the request was surprising. That gave me pause, and in that pause I noticed the second indicator. When she spoke, the telepathic bonds around me wavered, as though her voice were affecting the other slayers’ telepathy. That’s when I knew I had found a Dragon Singer, and one who was at least on her way to caring about my race.

Did you grow up knowing about the Dragon Singer, or do you have a specific memory of the first time your parents told you of her?

I first discovered the existence of such humans through the Illumination from my mother. Illumination basically is the transfer of memory from a parent dragon to their offspring upon hatching; it teaches us language, familial relationships, and common sense right at the precipice of life. But though I knew Dragon Singers existed and that my parents were looking for one, I didn’t learn the full story of why they were so important until I was in my second season, when the alphas of our clan berated my father in front of me for teaching that not all humans were monsters. I was distressed, and to calm me my parents told me the story of Bria, the first Singer, and how she took the first steps to bring the human-dragon war to an end.

What’s the strangest thing you’ve learned about humans (slayers or otherwise) that confuses you the most?

*thrums with amusement* But there are so many! How can I pick?

I think their fascination with how they look. They change their clothing every day (and by the way, if you humans are trying to make up for the fact that you don’t have scales for protection, why pick such flimsy materials?), they wash off dirt even if they don’t yet smell, and they mess with their fur—er, hair?—all the time. I’ve even heard from my author that some humans in your world change the color of their hair. Is that true? Have you ever done that?

If you could do something that humans can do, but dragons can’t, what would it be?

Singing would be fascinating, but since I’ve already talked about that, I’ll give you another. Sleeping in a bed. I don’t understand it fully, but Alísa speaks fondly of its softness. It must be so, made of flimsy fabrics and bird feathers, but I can’t fit into a house to experience it.

All right, a bit of a fun question to finish off with…most of my readers are humans, and I’m sure they’re all as curious about this as I am: describe what it was like as a hatchling the first time you flew. Did it come naturally, or did you have to learn how to fly much like a human toddler must learn how to walk? (a lot of ungraceful falls and the like)

A dragon hatchling learns to fly on the back of their parents. We spread our wings wide over theirs, connect with them telepathically, and learn to feel the winds through their minds, copying every movement from large wingstrokes to tiny adjustments to currents, updrafts, and downdrafts. After my first flight, I felt like I could do it all on my own from there on out, but a hatchling’s body isn’t quite proportioned right until they are a little over a month old. My first solo flight was launched off my father’s back, and I was able to follow my mother in front of us near-perfectly. It is a glorious feeling, to hold oneself in the air by your own skill and strength.

That’s so facinating! Thank you so much for coming to chat, Graydonn. May the winds carry you safely homeward! 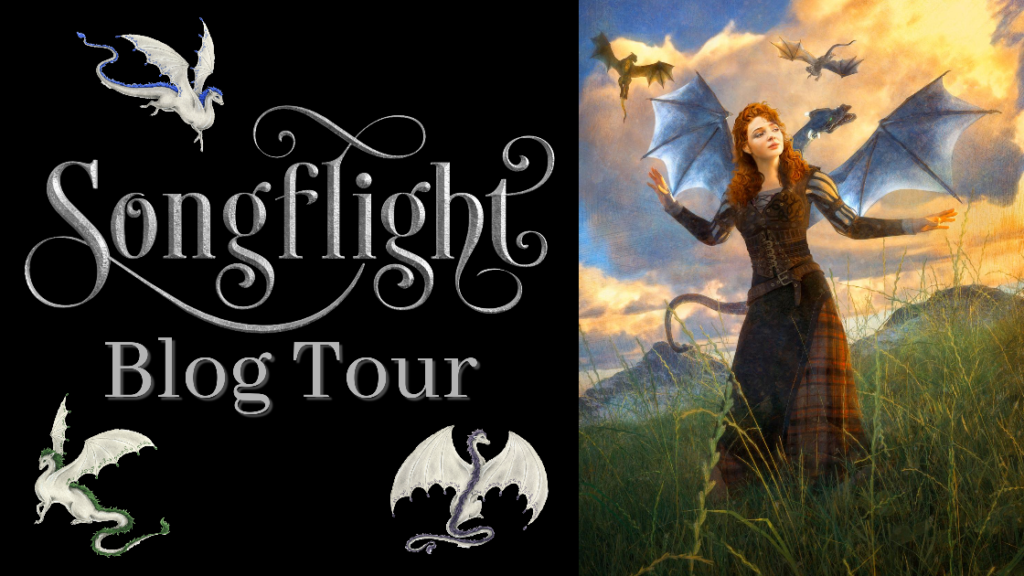 Here’s the rest of the blog tour schedule if you want to jump over to any of the other stops!

If you could do something dragons can, what would you pick? (I’d pick flying!) What’s the last fantasy book you read?